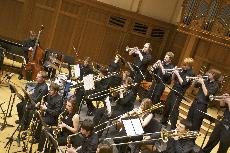 Editor’s note: The Symphonic Band also performed as a part of this concert, but we weren’t able to find anyone to write about their portion. We apologize for the uneven coverage.The Lawrence University Jazz Band played its first concert of the term last Friday evening for a small but enthusiastic audience in the Lawrence Memorial Chapel. The band delivered an energetic performance, which featured impressively tight ensemble playing and exciting arrangements.
The band performed under the direction of Lecturer of Music Patty Darling, who kept her talking to a minimum and allowed the band to play its four-tune set without much interruption.
The band opened the concert with “Opus 4,” a tune composed by the famed bassist and composer Charles Mingus. “Opus 4” was originally released on Mingus’s album “Mingus Moves” in 1973 and has since been arranged for big-band by Boris Koslov, the current bassist in the Mingus Big Band – a tribute band honoring the now-deceased composer.
The Lawrence University Jazz Band performed Koslov’s arrangement and deftly navigated through the different rhythmic feels, as drummer Patrick Marschke and pianist Carl Kennedy led the band in transitioning between the tune’s Afro-Cuban and swing sections.
The brass players sounded especially tight on “Opus 4” and used dynamics effectively, while the bass, trumpet and trombone soloists also played admirably.
After “Opus 4,” Associate Professor of English Tim Spurgin walked on stage. While I briefly thought I’d been tricked into attending yet another Freshman Studies lecture, Spurgin actually was on stage to narrate the next piece, Dan Cavanagh’s composition “Mississippi Ecstasy.”
“Mississippi Ecstasy” combines Timothy Young’s Mississippi River-themed poem with a slowly developing jazz arrangement that began with a quiet piano intro. The rhythm section gradually built from a quarter note-based groove into a more forceful, straight-eighth note rock feel, while the muted trumpet section nicely complemented the rhythm section’s development.
Spurgin read Young’s poem intermittently and periodically yielded the spotlight to saxophone and piano solos.
I enjoyed “Mississippi Ecstasy” because the arrangement was interesting and because the band played it well. And while I was initially apprehensive about the narration and jazz band combination, Spurgin did well – especially compared to speakers in some of the cornier jazz and spoken-word performances I’ve seen. However, the narration was overwhelming at times; when the band started grooving, I wanted to listen to the ensemble, not poetry.
Jazz Band followed “Mississippi Ecstasy” with “Chant,” which featured Associate Professor of Music and Teacher of Trumpet John Daniel on trumpet. “Chant” began with a trombone solo over a medium tempo swing groove that sometimes verged on sounding like reggae.
The band played through a variety of distinct texture changes and went into double time for Daniel’s solo. Daniel impressed the audience with a high and sometimes fast solo. His solo was definitely the climax of “Chant.”
Darling acknowledged the band’s soloists and hard-working saxophone section after the band ended “Chant,” and then counted off Jazz Band’s last tune of the evening: Kimberly-Clark Professor of Music and Director of Jazz Studies Fred Sturm’s arrangement of Astor Piazzolla’s “Milonga Loca.”
Jazz Band has been playing one of Sturm’s Piazzolla arrangements every year for the last three years. The arrangements are complex, fairly funky sounding and always prove to be one of the highlights of the Jazz Band concert. “Milonga Loca,” with its R&B-like horn parts and Peter Ehlinger’s exciting drum breaks, was no exception. It was an exciting and effective closer for the concert.

Sam Lewin (Emma Moss) Editor’s note: The Symphonic Band also performed as a part of this concert, but we weren’t able to find anyone to write about their portion. We apologize for the uneven coverage.The Lawrence University Jazz Band played its first concert of the term last Friday evening for a small but enthusiastic audience…