Robert Levy
Who wants his CDs, sheet music, and mouthpieces back, PRONTO!!!! 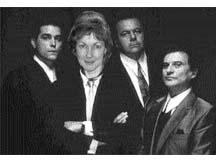 Cindy Patterson and three good reasons not to keep your library items too long. (Robert Levy)

After dealing with years of late fines and thousands of pounds of paper wasted on overdue notices, Cindy Patterson had had enough.“Who always has to deal with the chaos when a student keeps an item too long and there are twenty-five or fifty or one hundred and fifty people waiting to use that item? That would be me!” Patterson told The Lawrentian.

After assessing that she had no other options, Patterson elected to take an extra step to fulfill her duties as circulation services supervisor. During tenth week of last term, Patterson began deploying a brute squad to enforce library policy.

“The library is my domain,” she said, while leaning back in her chair and placing her feet on her desk. “I am trying to make my domain as safe and orderly a place as I possibly can for all the students who absolutely depend on me to do so.”

Patterson explained that the brute squad’s main function is to cut down the numbers of students who keep overdue items. She estimates that over 75 percent of Lawrence students get overdue notices at least once a week. Rather than using the notices as reminders, Patterson believes that students either throw the notices away without reading them or use them to decorate their dorm rooms.

“Such behavior disrupts the system, and I cannot do my job properly until it stops,” said Patterson, as she grabbed a prospective student’s father by the collar when he set off the alarm. “We have a very well-run library here, but if people cannot learn how to behave themselves in here, it’s not as if I am going to bend over backwards for people just because they come in to use the library.”

Patterson stressed that the presence of a brute squad has not and will not change basic library policy. The brute squad does its job only at night, and will not prevent students from attending to their normally scheduled academic activities.

In addition, Patterson wants to assure students that the use of a brute squad does not mean that the library will begin to fine students for overdue items.

“I am not trying to penalize the students,” said Patterson, as she deliberately typed a number of overdue notices that had accumulated on her desk. “Believe me, I do what I can, and if I can avoid handing students a fine, then I will. I’d like to not have to fine people, because it hurts me more than it hurts them. That’s what the brute squad is for, not to punish but to jog people’s memory. If I can use force to avoid giving out fines, then by all means, I want to help the students.”

While it seems that few students around campus have actually seen the members of the brute squad, there have been isolated reports of large, imposing figures standing in the shadows at night. No report or extra effort of any kind has been made by campus security.

Residence Life did confirm that seventeen students have gone missing since the brute squad was hired several weeks ago. Patterson would not say if those students were in any trouble with the library, because those records are confidential.

Library director Susan Richards could not assess the effectiveness of the brute squad, but did feel it had positive effects. “I can’t say much about this, because it’s really all Cindy. She’s paying the brute squad out of her own pocket, she hand-picked these men, and apparently they report to her. I just see fewer overdue notices going out, and that’s all you can ask for. Cindy is the most effective circulation services supervisor I’ve ever known.”