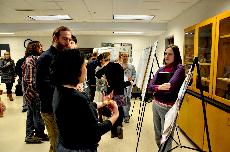 Members of the environmental studies department gathered Jan. 27 to host ENST Fest, a celebration of student field experiences.
ENST Fest is an annual opportunity for graduating seniors to demonstrate ways in which they have applied their knowledge of environmental studies outside the classroom.
“It’s something we’re going to do every year from here on out,” stated Associate Professor of Geology Jeffrey Clark, the chair of the environmental studies department. “It’s a celebration of what folks have done and also to see the variety of opportunities out there [for] what people are interested in.”
The event began with poster presentations, where attendees learned and inquired about a variety of environmental studies projects. Some posters included Meg Gallagher’s study on the effect of road salt on hydraulic conductivity of storm water retention ponds, Sophie Leppanen’s internship with eastern Wisconsin Sustainable Farmers’ Network and Lakeshore Natural Resource Partnership and Kevin Mason’s internship at Heckrodt Nature Preserve in Menasha, Wis.
The latter half of ENST Fest consisted of student presentations focused on a wide range of different experiences. To start, Nate Grady shared his findings during an independent study on the geographic information system.
Grady used the GIS to map trees throughout the Lawrence campus to create a solid resource for future Lawrentians to have a precise record of where trees on campus are plotted.
Said Grady, “I never really looked at the trees at Lawrence. They’re around, but we don’t really look at them carefully. That was one of the coolest parts – just learning all this background and stories about the trees and how they’re taken care of.”
Prior to Grady’s study, a detailed and accurate record of Lawrence trees did not exist. Now, Grady is working towards the creation of a map for tree donors so that they can assess the value of their contributions to Lawrence’s campus.
Heather Huebner then shared her experiences working with soil extractions from local rivers to examine contaminated sediment. According to Huebner, her internship at an extraction analysis lab allowed her to gain experience working in a laboratory setting.
“This was a really great learning experience for me because I could work from taking the samples in from the client, preparing everything and then actually running extractions and analyzing what comes from them,” stated Huebner. “During my time there I was able to view the entire process of what happens right when you take something from a contaminated river.”
The ENST Fest presentations then branched outside of the Wisconsin area, as Marc Deheeger discussed his research at the Coe Wilderness Field Station in Minnesota. Through an ACM Ecology class, Deheeger studied trees and tree age as well as lichen.
Looking at lichen, he was able to confirm the theory that “different trees have different species of lichen because of the chemicals that they have in the park. It was an interesting way of using what you have as your natural tools of sight to come up with an experiment.”
Sae Goto, an international student at Lawrence from Japan, continued ENST Fest with a talk on her internship experience at Hibiya Kadan, a prestigious Japanese flower company. During her internship, Goto participated in many community outreach programs and environmental events to teach children about green roots.
In addition to this, she was able to conduct a study on a topic of her choosing. “I wanted to focus on flower production in Japan. The reason why I was interested in this was because we always see flowers and think they’re really pretty but never think about where they are grown and transported. Unlike vegetables and fruits, a lot of people don’t think about flowers because they don’t eat them. There’s less concern about how safe and environmentally sustainable they are,” said Goto.
Goto noticed that in order to meet consumer demands for long lasting and aesthetically beautiful flowers, companies were not concerned with the hazardous chemicals they were using. From her research, Goto suggested a secondary brand to the flower company that focused on sustainability.
Sophie Patterson then shared stories from her experiences this past winter break, volunteering at a farm in Costa Rica. Interested in agriculture and practicing Spanish, Patterson looked to World Wide Opportunities on Organic Farms, an organization that connects penitential volunteers with opportunities on farms around the world. In her place of service in Costa Rica, Patterson’s primary project was to build a solar water heater at the farm.
Will Meadows concluded the event with his presentation on his work in Sierra Leone with Associat Professor of Government Skran’s Kids Give Community Outreach Program. In conducting a nutrition survey while in Sierra Leone, Meadows recognized a solid connection between hunger and the environment. Meadows claimed, “If your population isn’t fed, the last thing you’re going to worry about is keeping the environment healthy.”
The goal of Meadow’s studies is to provide suggestions for NGOs and the Sierra Leone government.
Meadows discussed the destructive effects that the country’s 12-year war had on its environment: “At Sierra Leone’s independence, the country was covered in 70 percent forest. In present day, it’s 4 percent. The environment has been seriously degraded.”
The event concluded with refreshments and an opportunity to ask students further questions about their projects.

Tammy Tran Students present their projects focusing on environmental issues to faculty, staff and peers. (Minh Nguyen) Members of the environmental studies department gathered Jan. 27 to host ENST Fest, a celebration of student field experiences.ENST Fest is an annual opportunity for graduating seniors to demonstrate ways in which they have applied their knowledge of…