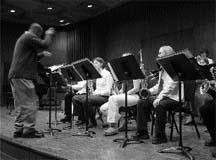 Jos Encarnaci¢n conducts the Lawrence University Jazz band at this year’s Jazz Composers concert that took place on Friday, April 11. The program featured ten compositions and/or arrangements for big band by Emily Zempel, Brent Betters, Charlie Christenson, Sam Scranton, Devin Burke, Peter Halloin, John Sutton, Andra Durham, Doug Detrick and Jonathon Roberts. The Jazz Band opened up the first half, followed by the Lawrence University Jazz Ensemble on the second half. The student compositions were final projects in the advanced jazz composition class under the instruction of Fred Sturm. According to Devin Burke, “Thanks to Fred Sturm and Jos Encarnaci¢n, the students in our class who ranged from novice to expert, were given a chance to write for and conduct with the two jazz ensembles. I had no idea it would be this cool.