From the archives: the story behind the Elda share drive 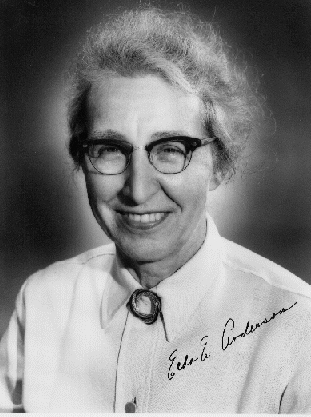 To retrieve an electronic file, connect to campus printers or access personal network space, Lawrentians are accustomed to clicking on the Elda campus share drive. As Lawrence’s main campus share drive, the Elda drive is visited on a daily basis, but has a name few know the story behind.

The drive is named after Elda Anderson, who was the chair of the physics department at Milwaukee Downer College up until 1941. She left Milwaukee Downer College to join the Manhattan Project, where she worked as a physicist to aid in the development of the atomic bomb during World War II. Her research focused on spectroscopy, which is the area of physics that involves the interactions between matter and radiation.

This work contributed greatly to the construction of the atomic bomb reactor design, allowing the reaction to produce heat and generate electricity. The bomb was fully constructed by the summer of 1945, allowing Anderson to be present at the historical Trinity Event July 16, 1945, which was the United States’ first atomic explosion in a New Mexico desert.

Prior to joining the Manhattan Project, Elda Anderson began her career at Downer College in 1934. “Elda is a somewhat forgotten figure on campus, which is a pity, given that she’s our own Marie Curie,” said Associate Professor of Physics Megan Pickett. “Most students, faculty and staff encounter her, in a way, every day — the main share drive is named for her.” In Lawrence’s long history, including the 1961 merger of Downer College and Lawrence College to create Lawrence University, Professor Pickett and Elda Anderson have been the only two women to earn tenure in physics.

After Anderson left New Mexico in 1947, she returned to Downer College and resumed her chair in the physics department. Additionally, she began pursuing work focused on combating the harmful effects of radiation. She contributed to the establishment of the Health Physics Society in 1955, and the American Board of Health Physics in 1960.

Anderson also published “A Manual of Radiological Protection for Civil Defense,” leading her to be named a fellow of the American Association for the Advancement of Science. By 1949, she moved to Tennessee, where she became the first chief of education and training in the Oak Ridge Laboratory’s Health Physics Division.

Anderson went on to work with faculty members at Vanderbilt University in Nashville, Tennessee. She contributed to the creation of a master’s degree program in health physics at Vanderbilt, and organized international courses in physics in Stockholm, Sweden, Belgium and Bombay, India.

Elda Anderson passed away April 17, 1961. This year marks the 50th anniversary of her death, making it a grand time to revisit Anderson’s accomplishments and contributions to both Lawrence and the nation. So the next time you click on the main campus share drive, remember to share the remarkable woman and story behind the Elda drive.