By winning the regular season conference championship, the Vikings get to hold the playoff tournament at home February 27th and 28th.
Andy York 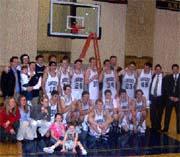 By winning the regular season conference championship, the Vikings get to hold the playoff tournament at home February 27th and 28th.

With a 76-63 victory over second-place Carroll on Saturday, the Lawrence University mn’s basketball team clinched at least a tie for the Midwest Conference Championship, and the rights to host the MWC Tournament in Alexander Gym next weekend. The Vikings won only the fourth championship in the school’s history.The Vikings had to fight with a strong pro-Carroll crowd as the game started. As the game went on, more and more Vikings fans arrived and made some noise. The Vikings and Pioneers played a close game for most of the first half. Seniors Rob Nenahlo and Chris MacGillis led the Vikings at the start of the game. The two seniors scored most of the Vikings’ first 20 points and kept them close early as the Pioneers played good defense.

Then the Vikings got hot. With 7:28 to play in the first half, the Vikings led 24-21. Then LU went on a 9-0 run as four different Vikings scored to give LU a twelve-point lead, which they would stretch to fifteen at the half and lead 40-25. The Carroll fans were quieted, and the LU fans were loud, as it looked like the Vikings were only twenty minutes away from a title. Vikings coach John Tharp didn’t think so however. He got on his team, making sure they played a solid twenty minutes in the second half to win their title justifiably.

The Vikings came out in the second half, and kept control. The Pioneers got as close as nine points, but Kyle MacGillis then took over for LU. MacGillis would have 15 points on the day, and would score 5 of them in a 9-0 Vikings run to but the game out of reach. LU got the lead up to as high as twenty-four points before the Pioneers scored points in garbage time cutting the final score to 76-63, and giving LU the title.

The Vikings celebrated on the court with their fans and families after the game. Both nets were cut down and celebrations were had. Vikings point guard Dan Evans talked about how being MWC Champions feels. “It feels great to be regular season champions. The reality of the situation is that we have two games remaining and the tournament so there is no time to rest on our accomplishments. We have achieved one of our goals but we have a few more to get, namely the tournament championship and an NCAA birth.”

The Vikings still have one regular season game left, tomorrow at Lake Forest. The game will not be easy as Lake Forest is playing for a chance to squeak in as the fourth team in the MWC Tournament to be held here in Appleton on February 27-28. The Vikings will play the fourth place team in the first round, and the number 2 and 3 teams will play with the winner facing off Saturday in the championship game. Evans says that there is no toughest task left this season, “All our opponents are going to be tough the rest of the way. We have a difficult road game at Lake Forest on Saturday. They will be playing for a chance at the conference tourney. And once we play the in the MWC tournament all the games will be tough. So there is no one team that you could pinpoint and say ‘they will be the toughest.'”