Joseph McCarthy: man behind the myth

This was the face of McCarthyism, the same one that shied away from girls during his youth in Appleton
Danielle Dahlke 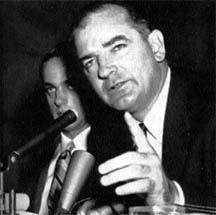 This was the face of McCarthyism, the same one that shied away from girls during his youth in Appleton

Joseph McCarthy, famous for his role in the Red Scare of the 1950s, is more than a name etched in American history textbooks. This man, as many people in the community know, was a native of the Fox Valley. Although the former senator is remembered for adding “McCarthyism” to the English language, few people are aware of how humble his beginning was during the early half of the last century.

The first McCarthy – Joseph’s Irish grandfather, Stephen Patrick – settled in Grand Chute a decade after the first homestead was built in the city of Appleton. (For those unfamiliar with the area, Grand Chute is where Wal-Mart and the Fox River Mall are located).

Joe’s father, after his marriage, built his own farm and eight-room clapboard house on what is now referred to as McCarthy Road. There, the McCarthys raised cows, horses, and chickens, and also grew corn, hay, barley, oats, and cabbage.

On Nov. 15, 1908, Joe was born, the fifth child of Tim and Bridget McCarthy. Under care of a stern and rigid father, he grew up learning all the fundamentals of farming. His parents, also advocates of a good education, sent him to Underhill School, a one-room schoolhouse, which he attended until eighth grade.

After losing interest in education, Joseph made an attempt at entrepreneurship. With $65, he fenced off an edge of his family’s property and started his own chicken farm.

Beginning by selling cases of eggs to local stores, McCarthy soon became successful and drove as far as Chicago to market his poultry. He owned 2,000 hens and 10,000 broilers (young chicken) at his business’s peak. His photo graced the pages of poultry magazines, and he emerged as an authority in disease, marketing, and feed.

At age 17, Joe came down with a serious case of influenza and was forced to stay in bed for days. Left in the hands of careless neighbor boys, his chicken farm was swept by disease, and a large percentage of his stock was lost. After the disheartening event, he lacked the enthusiasm to rebuild, and sought other career options. As for his social life, McCarthy was a man of contradictions. Although he regularly attended community functions such as square dances with the other McCarthy children, he is remembered as being nervous in the company of the opposite sex. No “ladies man,” McCarthy was frequently referred to as shy, awkward, ugly, and introverted.

Ironically, he has also been labeled a handsome, hyperactive, outgoing, daredevil, and extroverted. He went so far as to drive his brother’s motorcycle into a corncrib at the age of 13 and broke an ankle in the process.

Whether he was truly popular or not, we may never know. Nonetheless, his social standing wasn’t a hindrance in his finding a career.

McCarthy eventually became manager of a grocery store, and decided to go back to school after realizing the lack of opportunity in such a position. He entered high school as part of an accelerated program while continuing to work. After graduation, he held various other menial jobs, and was eventually accepted into Marquette University of Milwaukee.

After receiving a degree in law, McCarthy ran for senate in 1945. Soon after, he began giving his infamous communist-hunting speeches. He claimed to possess the names of 205 communists that were members of the State Department, and he held hearings on television with a nationwide audience.

In the 1950’s, McCarthy emerged as one of the most controversial and ultimately feared men in Washington, D.C. At the time, he was labeled by reporters as “the worst senator ever,” and “historical half-truths” became know as McCarthyism.

After his political downfall, McCarthy led an obscure life until his death on May 2, 1957, at the Naval Medical Center in Bethesda, Md. A week later, services were held at St. Mary’s Catholic church here in Appleton. He was buried on a bluff overlooking the Fox River.