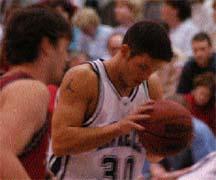 Senior Rob Nenahlo is the rock of the Vikings team. Nenahlo leads the team in scoring. (John Gale)

The Lawrence University men’s basketball team, ranked thirteenth, used all they had to defeat archrival Ripon at home by a score of 82-62. The Vikings then escaped the ranking jinx for another week as they defeated a tough St. Norbert team on the road 74-65.The Vikings had a loud and boisterous crowd on hand for the Ripon game. The Vikings started early and got the crowd on their feet by jumping out to an early 9-0 lead. Ripon quickly caught up, and cut the LU lead to three at 15-12 before the Vikings went on another 9-2 run with two threes from Aaron Sorenson. The Redhawks would bring the lead back down to five, but LU would have a nine point lead at the half 42-33.

The Vikings continued their three point shooting prowess in the second half as they came out and immediately Brendan Falls hit two treys to restart the game. With 17:26 to go, Tom Becker would hit a three for Ripon to get them back within five of LU, but that’s as close as they would get, as the Vikings would completely dominate the rebounds, and continue to hit three pointers.

The Vikings shot 43 percent from beyond the arc against Ripon, and were led by Sorenson’s four threes. Falls had three from deep for LU as well. The Vikings had four players in double figures at Rob Nenahlo led LU with 15. Sorenson and Chris MacGillis had 12 a piece and Falls had 10. The victory for LU was their third straight over their archrival, and their biggest margin of victory over Ripon since 1958-59.

The Vikings had to go into a rowdy crowd in DePere against the Green Knights Tuesday night. The Vikings had been boosted up in the new poll from 17th to 13th, the highest ranking the school’s history. The Green Knights are always tough at home, and had knocked off LU last season to eliminated them from the Conference Title.

The first half was a back and forth affair that saw several lead changes. St. Norbert jumped out early, but the Vikings fought back, taking a six-point lead eight minutes into the game. The Green Knights controlled the rest of the half however, as LU lost the lead and were trailing 31-28 at the break.

The lead see-sawed in the second half as both teams traded baskets and couldn’t hold a lead bigger then four points. With 11:30 to go, the Green Knights had a 50-46 lead. The Vikings went on a 10-3 run and with 8:15 left, the Vikings had the lead for good 56-53. The Vikings would retain the lead down the stretch, and would leave victorious 74-65.

The Vikings had three players in double figures, and were led by this week’s MWC Player of the week, Chris MacGillis. MacGillis had 20 in the game for the Vikings, and scored their last eight points. Chris Braier earned another double-double for LU with 16 points and 10 rebounds. Nenahlo finished the scorers in double figures with thirteen. Brandon Hanson led all scorers with 27 for the Green Knights. LU is next in action tonight with another tough road game at Illinois College. The Blueboys knocked the Vikings out of the MWC tournament last season with a 86-77 overtime win, and the Vikings will be looking for redemption. Game time is 7:30 P.M.

Andy York Senior Rob Nenahlo is the rock of the Vikings team. Nenahlo leads the team in scoring. (John Gale) The Lawrence University men’s basketball team, ranked thirteenth, used all they had to defeat archrival Ripon at home by a score of 82-62. The Vikings then escaped the ranking jinx for another week as they…