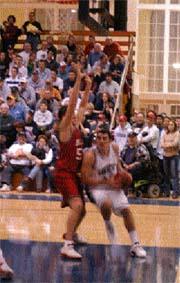 How does the 13th ranked team in Division 3 follow up a twenty-point blow out of conference rival Ripon College? The answer would be to outplay St. Norbert on their own court and establish themselves on top of the conference. Now the Vikings find themselves on a nine game winning streak along with their national ranking. Chances are the Vikings won’t part with their streak anytime soon. With a physical inside presence from the powerful Chris Braier, the Vikings were able to neutralize the explosive guard combo of St. Norbert’s Aaron Faulkner and Division I transfer Brandon Hansen. The duo are averaging just over 38 points on the season and did not disappoint their home crowd with a combined 47. Clearly these two guards are among the top pair in division 3. As Lawrence pulled away late in the fourth, Hansen drained a pair of highly contested three pointers that threatened to steal the game.

In the end, it was Braier in the paint with the outstanding bench play of Chris “Head” MacGillis that turned the tide. Braier’s physical inside force produced 15 trips to the line compared to 11 total trips by the entire St. Norbert team. Over the last two victories the Vikings are averaging just over 35 free throw attempts per game.

Providing some offensive boost in times of need, MacGillis continues to be a playmaker in the clutch. Seemingly frigid fluids must be coursing through his veins as he hits big shot after big shot in close games. After hitting the game winning three point play at Carroll College last week, MacGillis scored ten points in the final 1: 35 in the game at De Pere.

What Chris MacGillis does off the bench is a prime example why Head Coach John Tharp puts his team in positions to win every game. With so much talent on the roster, Tharp manages his squad’s minutes and energy as would a Ripon graduate a McDonald’s fries and burgers. When Tharp sees his team struggling to maintain tempo or concentration, he has three or four guys ready to bring it back up. Being able to go deep into his bench, Tharp is able to keep his team fresh for the end of the game. That is why in the last two games the Vikings have outscored Ripon and St. Norbert by 11 and 12 points in the second half respectively. Look for the Vikings to continue their excellent play with fan support at home and on the road.

Tony Totoraitis Junior Tony Olson played tough in the middle against a formidable Ripon front line. (John Gale) How does the 13th ranked team in Division 3 follow up a twenty-point blow out of conference rival Ripon College? The answer would be to outplay St. Norbert on their own court and establish themselves on top…