Members of the menÂ´s basketball team got together before a game last year to get psyched for play. They hope to have a strong season.
Anthony Totoraitis 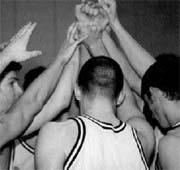 Members of the menÂ´s basketball team got together before a game last year to get psyched for play. They hope to have a strong season. (Ariel)

How good is the Lawrence men’s basketball team? Just ask Dean Nancy Truesdell. She twice last year witnessed her alma mater, Ripon, being handed a defeat by Brendan Falls, Chris Braier, and company. How did the Vikings manage to defeat a school that prides itself highly on athletics?

The basketball team was able to dispatch Ripon using a team effort. The team has so many weapons you would think George W. would be sending tanks in to investigate. But the only lethal weapons here are the ice-cold jump shot of Brendan Falls and the amazing rebounding ability of Chris Braier.

Want to focus on just those two? Great; head coach John Tharp hopes other teams do, too. He has six other players capable of scorching the other team for 30 points each. A difficult question to answer will be which five get the nod to do the scorching.

The team lost no seniors but did say goodbye to a few reserve players. The team that finished second in the regular season is back and it has a point to prove. Last year was not a fluke. The team will be looking to improve on its second place finish and perhaps host the conference tournament.

Looking around the conference, there are some formidable opponents out there.

Carroll College, with Julian Schwartz, is always dangerous. He single-handedly beat the Vikes at home last season, and can repeat that performance at any time.

Grinnell and their crazy style of game is a threat as long as there is time on the clock.

Surely the conference champion will be out of these three teams.

Out of all the uncertainty that is the preseason, only one thing is certain. There will be a section of students in Alexander gymnasium waiting to cheer its team to victory.