Referees separate players during the game between the Vikings and UW- Stout.
Jesse Belcher 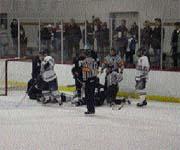 Referees separate players during the game between the Vikings and UW- Stout.

The Lawrence Hockey team had their season openers last weekend at home at the Appleton Family Ice Center. The first went up against UW Stout, losing 3-0 and the next day took on St. Scholastica, falling 6-4. With a large number of freshmen, it may take the Vikings a few games to get into a steady rhythm, something that was evidently lacking in the Stout game. Their radar slightly askew, many passes would end up just beyond the reach of the intended player, resulting in a turnover that almost led to goals numerous times. This is not to say that they didn’t come close themselves.

A couple of shots rattled the metal of the goal, but nothing fell for the Vikings and they finished goalless in their first game of the season. The play of the freshmen was promising, however, with Cris Benitah and Kalle Larson, both from Sweden, impressively imposing as the hitmen for the team. With 12 freshmen on a team of 26, there is an inexperienced side to the team that manifested itself in the first game, as many of the players appeared nervous.

Despite letting in two goals, Swedish goalie Daniel Ljung was impressive with his quick reflexes stopping many other shots. Andrew Isaac was called in for Ljung for a period of five minutes in the first period as Ljung appeared to be nursing a leg injury. Issac was also in goal for 45 of the 60 minutes in the game against UW Stout and is getting unexpected experience which can only benefit the team in the long run.

In the second game, against St. Scholastica, the visitors went up 2-0 before Larson put the Vikings back in it with his and the teams’ first goal of the season. Benitah, Mike Beauchaine and Danny Schroder also scored for the Vikings, but their efforts would not be enough to win the game. With a season that extends into February, the team has plenty of time to find its cohesion.