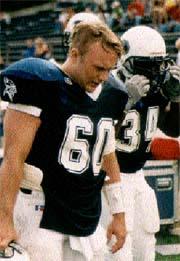 The Lawrence football team had its most successful season in years, but still fell short in the end. As the seniors leave, underclassmen will have to step up to fill their shoes. (Courtesy of Ariel)

With a 21-20 victory over Knox College last Saturday, Lawrence University football finished its season with a 3-7 record. For the seniors it was their best finish in their four years. While it was the best season since 1999, it still left a foul taste in the mouths of the players. Losing three games by a combined total of six extra points hurts for those players who can’t control special teams.

The seniors put the team in a position to win almost every week, only to see the team stumble and fall down the stretch. This team was in every game save two. With a bounce of the ball a different way this team finishes 8-2.

There was the heartbreaking loss to St. Norbert, then the last-second missed extra point to lose to Ripon. The seniors finish their careers having never beaten either of these two teams. Frustration and disappointment can sum up the effort of the talented senior class that was aiming to turn the program around.

The full potential of this year’s talented team was never reached. Bright spots for the team included the offensive line, which not only allowed a scant 16 sacks in 10 games, but was also able to effectively clear the way for Justin Berrens, the conference leader in rushing.

Receiver Zach Michael finished his storied college career and now looks to the future and a possible professional career.

Lineman Tony Bouressa followed in his father’s footsteps and ended his career with a first team all-conference bid.

Steve Heindel will graduate with the hatred for the defensive back still burning hot in his head.

The talent was there; the coaching was not. Changes must be made. With talent still left in the returning players, it’s clear that Lawrence can return to its winning traditions.

Still, there was something to celebrate this year that in years past was missing. Lawrence snapped a 17-game losing streak. They played for the conference lead in week five.

Against their top two rival teams, Norbert’s and Ripon, Lawrence had a chance to win the ballgame. Perhaps if the ball had bounced in a more favorable manner, perhaps if the referee’s flags had come at more opportune times, things could have come out for the better.

Another season ends with those close to the program left saying, “What if?

Tony Totoraitis The Lawrence football team had its most successful season in years, but still fell short in the end. As the seniors leave, underclassmen will have to step up to fill their shoes. (Courtesy of Ariel) With a 21-20 victory over Knox College last Saturday, Lawrence University football finished its season with a 3-7…