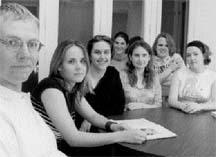 This year, the staff of Lawrence’s yearbook, Ariel, will present several changes in the book. Free distribution of the 2003 Ariel, as well as modifications in the format and quality of the yearbook, are all elements that the yearbook staff hopes will increase responsiveness and involvement in Ariel.For the first time, Ariel, which will be distributed during the next few weeks, will be free to returning students if they allow their picture to be taken for the 2004 book. Transfer students and freshmen are also encouraged to get their pictures taken for next year’s book, although they will not receive yearbooks in exchange.

This year, the book can be distributed for free due to changes in funding and increases in student activity fees. Previously, Ariel was offered to students for $40. The cost of printing each book has also decreased, since more books are being printed. This year, 1400 books were printed for $20 apiece, as opposed to 400 books for $40 each.

In addition, the 2003 Ariel features several aesthetic changes. Each Ariel now has a central theme and is built upon a set of templates. Greater organization has given the book a more cohesive and inspired appearance.

Jonathan Edewards, former photo editor, said, “There is a greater emphasis on achieving good design, so the book has an artistic look to it.”

Photographs featured in Ariel also contribute a polished professionalism to the 2003 book. Instead of the everyday cameras used by the Ariel staff for years, the staff now takes photos using an SLR, or single lens reflex, camera. SLR cameras are generally considered a sharper and more professional alternative to point-and-shoot cameras.

The artistic quality of the photographs is more professional as well. The Arielstaff took over 3,000 pictures last year and only the best of these are included in the 2003 book.

Edewards explained, “There are less ‘say cheese’ photos and more action photos, which are more interesting and true-to-life.”

The staff hopes the added incentive of a free yearbook will encourage current students to get their photographs taken for the 2004 yearbook.

Besides the final product, the yearbook staff itself improved in this last year. The 2003 staff is twice the size of the 2002 and 2001 staffs, a trend that Edewards and others on the staff hope will continue.