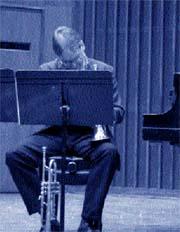 Who says you can never come home again?The former director of Jazz Studies here at Lawrence, Ken Schaphorst, returned last week to perform pieces from his most recently released CD. The album, entitled Indigenous Technology, features current Lawrence professors Matt Turner, cello and Dane Richeson, percussion. Ken, who composed all the pieces himself, performed on both trumpet and piano.

Besides teaching at the illustrious Lawrence conservatory for ten years, Ken has made quite a name for himself in the world of jazz. He helped to found the Jazz Composers Alliance, and has won numerous composition awards, grants and fellowships from the National Endowment for the Arts, Meet the Composer, and many other associations. The Ken Schaphorst Big Band, founded in 1988, has received much attention, and recently recorded an album called Purple on the Naxos Jazz label.

Ken was appointed Chair of Jazz Studies and the New England Conservatory in 2001, and has since spent most of his time in the Boston area. It was great to have him back here at Lawrence, even if just for one day.

The concert, held Monday, the 17th in Harper Hall, was one filled with energy and great dialogue. All of Ken’s compositions were good, and were made better by great performances from his sidemen, Matt and Dane. Clearly, these three performers had developed a very good rapport with each other, and their comfort and understanding of one another made for a memorable performance.

Though he may have moved on to greener pastures, Ken Schaphorst has shown that he will be a welcome figure on the Lawrence campus for many more years, and I think I speak for many people when I say I hope to see him again soon.