Renovations across campus bring a contemporary look to Lawrence

Renovation of the library means a better and more aesthetic facility.
Gustavo Setrini 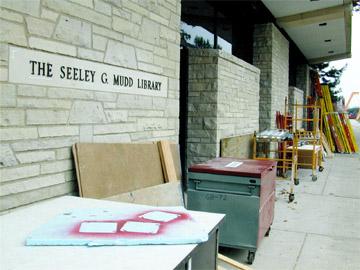 Renovation of the library means a better and more aesthetic facility. (Quinn Lake)

As the year begins and returning students settle into old routines, they may notice some changes on the Lawrence campus since last spring. In addition to the summer maintenance that occurs between each academic year, the university undertook some large-scale renovations requiring a budget of nearly $12 million. These projects were coordinated by the office of Bill Hodgekiss, vice president of business affairs, and involved work by the Oscar Boldt Construction Company, a local firm. Among these projects, the renovation of Youngchild Hall of Science was the largest, amounting to $10 million of the university’s budget this summer.

According to Hodgekiss, the building was completely gutted last spring in order to achieve a design agreed upon by science faculty and the contracted architects. Constructed in 1964 to house the science program, Youngchild Hall has received a plumbing and electrical upgrade, new laboratories and classroom spaces, as well as a renovated facade. It will now be the permanent home of the geology and physics departments and also house part of the biology department.

The second largest project of the summer was the renovation of the first floor of the library. The $1.3 million renovation furnished the main level of the library with new lights, carpeting, and furniture. Students will also notice that the media center has been relocated to the main floor, allowing the library to consolidate the conservatory and college print and media reserves at the main circulation desk.

The media center’s former location on the second floor has been used to consolidate the university’s collection of periodicals, previously split between the first and second floor.

Library director Susan Richards states, “The renovation should provide vastly improved service for students and faculty. All service areas are now on one floor and are positioned in a logical way. The new furniture, lights, paint, and carpet provide a light, comfortable study environment for students.”

Other projects included the purchase and renovation of the former executive house apartments that are now in use as student housing; the addition of a retractable extension to the chapel stage for large orchestra performances; new windows, lighting floors, ceiling, and doors on the third floor of Main Hall; minor renovations to Sampson House; and minor changes to the Chapel’s exterior. With the exception of the Chapel, these renovations did not involve contractors outside of Boldt.

Hodgekiss indicated that plans for the next two years include the incremental completion of the Main Hall and Library renovations, and steps toward the construction of a new dormitory and campus center.