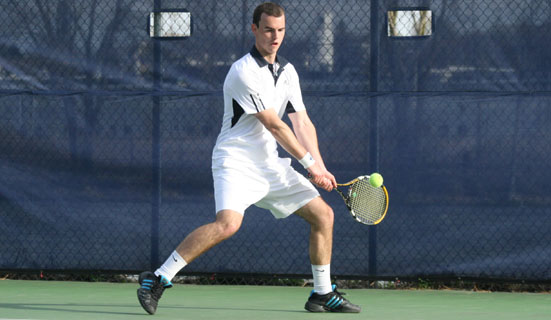 Jason Dunn plays both No. 1 singles and No. 1 doubles for the Lawrence University men’s tennis team.

1) What was the hardest part about having such a young team this year?

The hardest part of having such a young team this year was overcoming the hurdle of playing against teams with a large number of returning veterans. Our team, consisting of one senior, one junior, two sophomores and two freshmen, had the bare minimum number of players you can have to fill out a team. We had some players come and go throughout the season but by the end of the year we became a functional unit. Our two upperclassmen captains, Caleb Ray and Roy Wimer, both provided the underclassmen with wisdom and helped us progress positively through the season. I am incredibly proud to be part of such a great group of gentlemen.

2) What is your favorite part about the conference tournament weekend?

My favorite part about the conference tournament weekend is watching how much our team has improved when playing against teams we played earlier in the season. Usually we play our matches at the same time, but during the conference tournament, different flights play at different times. Also, it is fun being able to cheer on your teammates in the Nielsen Center, where the Wisconsin Badgers play. The atmosphere of the tournament is exciting, and if you crave competition like I do, then you have a blast watching individuals give all they have against one another.

3) If you could play any other sport in college, what would it be and why?

If I could play any other sport in college, it would have to be hockey. I played hockey from first grade until arriving at college. It was my main sport my whole life and it proved difficult transitioning to not playing anymore. The hockey team at Lawrence seems like a solid group of guys and I have a deep respect for them and anybody who plays the game. It is not a typical sport because the time and dedication that you have to put in transforms you into an incredibly hard nosed person. I still love the game and miss playing it at times.

4) If you were stranded on and island with one member of the team, who would it be and why?

If I was stranded on an island with one member on the team it would preferably be Bile Ali because I know he would be the only member on the team who would not even consider resorting to eating me if a food crisis were to occur. Also, he is a very entertaining individual and there would never be a dull moment with him.

5) What are your summer plans? Any tennis?

My summer plans consist of living in Wausau, Wisc. and interning with the Cardiovascular Research and Education Foundation of the Aspirus Wausau Hospital. I’m looking forward to working with some top class specialists and learning invaluable knowledge from the internship. The remainder of the summer I plan on working as the women’s tennis team co-manager. Hopefully, I can keep my tennis game up throughout the summer as well as have time to hang out with my family.

My favorite part of training is the environment. I love the people I work with and the team, they make the job seem so much fun. I look forward to going to work, which allows me to put the extra time in to make everything run smoothly in both the room and on the field.

2) Which team is your favorite to train for? Why?

Football, without question, because of the guys, the coaches and the work-load and responsibilities that come with it. In addition, the football trainers get the privilege of having sun drop and playing UNO on game days!

3) Favorite taping to do? Why?

Wrist. If anyone knows me, they know I tape wrist and Courtney does ankles for the football team; we have a system.

4) What will you miss most after you’re done and graduated?

I will miss the team and my co-workers — the last game next year will definitely bring tears before the game even starts.

5) What made you decide to become a student athletic trainer?

On a softball recruit visit, Alex Goodson mentioned she was a student athletic trainer and suggested I get involved. 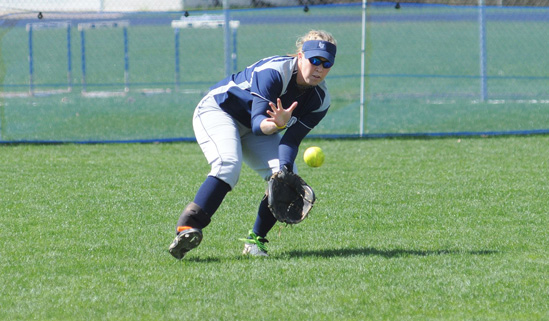