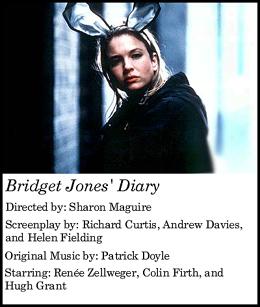 The first time I saw Bridget Jones’s Diary was in a dark and remarkably sticky theater. I must admit the environment would have simply ruined almost any show. Any show, that is, but this one.

This horribly comic yet gently heartwarming script is based on the novel by Helen Fielding. Originally written as a newspaper serial, it runs through a year in the life of the single, thirty-two year old Bridget Jones. The original concept is loosely based on the popular Jane Austin novel Pride and Prejudice. A much updated and comically twisted version, it deals with the ordinary and extraordinary problems of single life.

The intro itself is enough to captivate you-a New Year’s declaration that hints at the huge number of neuroses that she suffers from. From weight problems to exorbitant smoking and drinking, from family problems to age issues, this girl has them all. Yet we follow her through a year of her progresses, constantly hoping that she will manage to get it together. Her largest problem focuses on the “emotional f*ckwittage” of the opposite sex. The reader gets a definite sense of frustration and an intense buildup to the end, which climaxes in several unexpected ways.

The movie, on the other hand, takes a more general and expected route. The film, while following the general line of the novel, takes a very different path towards an ending. One fan was quoted as saying “I’d consider this a very nice adaptation because it sticks to the spirit of the book. Some literary elements that would not translate as well to film are replaced by film elements that would not translate well to literature.”

And it is true; the essential roots of the novel can clearly be made out in the film. Characters are very well represented and the very British sense of comedy, while not overwhelming the film, can gladly still be found. It fact, the characters seem to almost spring to life from the page. It helps that the character of Mark Darcy was written with Colin Firth in mind. Colin, who plays Mark Darcy on the big screen, also played a different Mr. Darcy in BBC’s and A&E’s 1995 collaborative production of Pride and Prejudice. While the two characters share some obvious differences, they both have the same aloof yet eventually charming features.

Also well acclaimed for the role is the leading character of Bridget. Rene Zellweger, lead actress, is hilariously funny. Her accessible and heartwarming portrayal of a held-back but unstoppable femme is a very plausible mirroring of the novel’s account of Bridget. Even more amazing is the actress’s willingness to adapt for the part. The character’s description required Renee Zellweger to gain more than twenty pounds, yet she donned the extra weight and daringly shows herself as a real human being and not, as Helen Fielding puts it, a “stick insect.”

The film has done very well in theatres, grossing more than 4 million dollars this week alone and rating number six in the top ten highest grossing film of the week. Since its opening on April 15th Bridget Jones’s Diary has managed to stay within the top ten movies on the large screen charts. With its humorous scenes (and I just have to mention one of the funniest fight scenes I have ever seen) and solid character choices, this film echoes perfectly the best selling novel it was based on. This well written and obviously popular film is among one of my must-sees for the summer season.