Warmth of people compensates for coldness of Russian climate 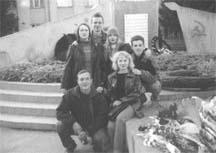 Kurgan Russia is located just east of the Ural Mountains. It is the capital of a state that shares its southern border with the Central Asian nation Kazakhstan. The city itself is relatively small, about the size of Appleton; however, almost half a million people live there in Khrushchev-era apartment complexes. The life is difficult. Hot water cannot be relied upon even in the bitter cold of winter. Electricity and gas are also prone to disappear for a few hours even though the bills have been paid.

The average Kurganian earns around 2000 rubles a month. That’s around $63. Each family has a car, but seldom drives it; it’s too expensive. Instead the population relies on overcrowded trolleybuses to transport them to school or work.

Kurgan also has an interesting history. Kurgan’s most interesting claim to fame is the Decembrists. The Decembrists were a group of intellectuals who advocated liberal reforms during the 1825s and tried to overthrow Tsar Nicholas I. It didn’t work, and some of the Decembrists that weren’t executed were exiled to Kurgan.

I was in Kurgan of my own free will. I was a student of language, a student of Russian culture. This was not the Europeanized culture of Moscow or of Peter the Great’s St. Petersburg; this was the heart of Russia.

The social life of Russians in Kurgan is interesting. The younger Russians save up their money so that they can dance and drink at the only club in town, Academia. For $1.50 one can dance from 11 p.m. until dawn.

The older Russians get together mostly around birthdays, which are celebrated with a full table and, of course, vodka and oftentimes wine.

Despite the temperatures that dipped down to -40F, I found myself at home. The warmth of Russian hospitality welcomed me into a society that most Americans know little about. The food was abundant and incredibly tasty (there is quite a bit more variety to the Russian cuisine than borsht). The conversation was lively and sincere. In less than four months I established personal and professional relationships that will last a lifetime.