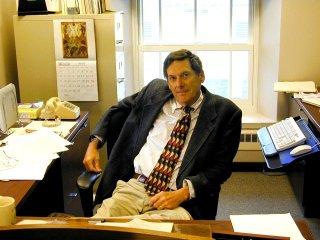 This spring, J. Michael Hittle, David G. Ormsby endowed chair of history and political economy and one of the university’s most respected teachers, will retire from the faculty after nearly four decades of service to the Lawrence community. His departure will mark the end of a long and distinguished career in academia—but also, as he sees it, a new opportunity to pursue life-long interests, both academic and non-academic.Hittle arrived at Lawrence in 1966 after completing his M.A. and Ph.D degrees at Harvard, where he studied Russian history and culture under the guidance of internationally renowned scholar Richard Pipes, with additional emphases on the history of the Byzantine Empire under R.L. Wolff and modern intellectual history under Crane Brinton. He earned his B.A. in history from Brown University.

His interest in the field of Russian history, he says, began to take form while he was an undergraduate at Brown, as the Cold War reached a fever pitch. Hittle entered Harvard as part of a small cohort of young Americans who started studying the Soviet Union independent of nationalist and politically based predispositions, which he says tended to affect Russian and Soviet scholarship of the day. “We were not wildly revisionist,” he says, “but we thought maybe there was a different view to be taken.”

And while entering Soviet studies during the height of the Cold War may have inspired a degree of skepticism and, at times, suspicion in some of his more patriotic acquaintances—“It wasn’t a career decision my parents spoke about with their friends extensively—at least not initially,” he jokes—it is a decision that Hittle seems never to have second-guessed. Instead, he looks back on his career as a Russian scholar with a certain measure of awe, excited to have witnessed the history of the country unfold over the course of the last few decades.

“I am surprised still to look over the lectern and see Russian students sitting in the classroom—it’s something that was absolutely unthinkable when I arrived,” he said.

So dramatic have been the changes in the political and cultural circumstances of his field that many of his courses—both in Russian and 20th century world history—have gone through several different incarnations as ‘material’ has been added, revised, and reformulated with the times. In the last three-and-a-half decades, he says, history has literally accrued in his course folders in the form of newspaper clippings, book reviews, scribbled emendations, and the occasional comic strip. “My folders have taken on a curious kind of life for me… they have become an almost mini-historiography of the topics.”

Among his proudest accomplishments during his career, he says, is the collaborative role he has played over the last fifteen years in the reshaping of his department at Lawrence to include a broader, global perspective on history—an approach he insists has an ever-increasing relevance to students of the liberal arts.

Also a point of particular pride for Hittle is the department’s current version of historiography, which he developed with Anne Schutte a number of years ago. The two had in mind a course that would examine the philosophical and methodological underpinnings of discipline, and Hittle is pleased with the outcome: “the course allows majors to do some sophisticated work … it can be a wonderful benefit.”

In addition to his time spent teaching, Hittle also served an eight-year stint as dean of faculty, from 1980 to 1988, an experience that he says gave him the unique opportunity to “see the whole of Lawrence” both as faculty member and an administrator. He says learned to appreciate the complexity of the institution from working closely with President Warch and the board of trustees to determine the direction of the university to assisting the faculty in carrying out their obligations on a day-by-day basis.

Hittle does not plan on teaching any courses in retirement—instead, he says he will catch up his “millions of interests and hobbies” that have gone too long unaddressed—travelling, fishing, hunting, leisure reading—but may also use his free time to work on some scholarly projects he has had in mind for years but has been putting off.

Lance Benzel (Ryan Marx) This spring, J. Michael Hittle, David G. Ormsby endowed chair of history and political economy and one of the university’s most respected teachers, will retire from the faculty after nearly four decades of service to the Lawrence community. His departure will mark the end of a long and distinguished career in…