Four extra points for the Vikings 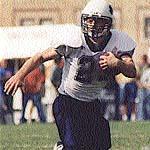 Viking of the Week Justin Berrens rushed for 215 yards against St. NorbertÂ´s.

Extra Point One: This past weekend’s 28-24 loss to St. Norbert proves that the Vikings are a formidable group of young men ready for any challenge.

Last season the Green Vikings trounced the Vikes, 55-0. Head coach Dave Brown has righted the ship whose sinking spanned three seasons. By being positive and building on the nail-biting defeat, the Vikings could run the table.

This team has improved dramatically over the off-season and now looks impressive. By staying positive and consistent, Brown and the Vikings could look to finish near the top of the conference.

The Viking defense finally seems to be hitting its stride. The defense surrendered only one touchdown in the second half, and gave the offense the ball back with a chance to win the game.

Led by the spirited down lineman Steve Heindl and linebacker Scott Caroen, the defense did what it needed to do in the fourth quarter.

The defense continues to create turnovers and set up the offense with good field position.

Five games into the season the Vikes have piled up eight interceptions and seven fumble recoveries. Taking advantage of these opportunities is key for the Vikings and their growing legion of fans.

The offense is being boosted by the play of freshman quarterback Eric Aspenson. He creates plays and causes defensive coordinators to become ill. His favorite target, Zach Michael, doesn’t mind adding more touchdowns and records to his collection.

But Aspenson’s help doesn’t stop there. With the deep play potential, teams have to keep an extra man out of the box to prevent the deep ball. This gives conference leading running back Justin Berrens all the more space to run wild.

Throw in role players like Nick Korn and Craig Garvey, who clean up the drippings of this potent offensive machine, and there is fear in the defenders’ eyes.

While there was so much good in this game, several key areas cost the team.

In close games against evenly matched teams, special teams often proves to be the difference. While the offense and defense were holding their own, Lawrence’s special teams wet the bed.

Protection and coverage for Lawrence’s all-time leader in punts and punt yardage, Robert Campagna, continues to be a problematic area. With 22 seconds left in the half the Green Knights returned a Campagna blocked punt for a touchdown and a nine-point lead. Take away this score and the Vikings would be sitting in good position in the conference.

But the most obvious area of dreadful football has been the kicking game. Simply put, Lawrence has none. There is no field goal range, nor any confidence in its extra points sailing through the uprights.

In practice Brown puts all the pressure he can on his kickers in an attempt to simulate game time pressure. Should he succeed in healing the kicking woes, the sky would be the limit.

Only four extra points separated the teams on Saturday.