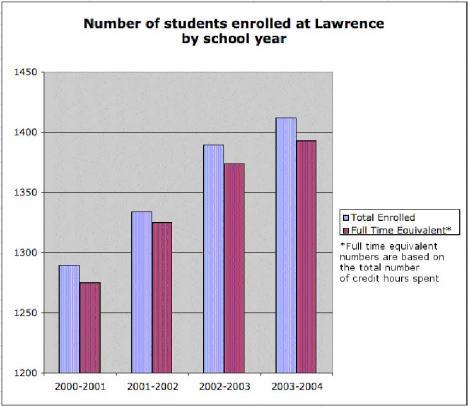 From autumn three years ago to the fall of leaves today, Lawrence University’s student body has increased from 1,289 to 1,412 students. Although 123 Lawrentians may not seem like a drastic increase, current enrollment is almost 10 percent higher than in 2000-2001.

This rise in student numbers has shaped many contours of the university, and while expansion has not changed Lawrence’s financial mold, it has etched in some new designs.

Perhaps the most important fiscal numbers for Lawrence are those of the endowment. The endowment reached a record of $188 million in December of 2000, but fell sharply to $176 million in June of the following year. Another year later the endowment had fallen even further to $162 million, and held within two million of that figure in June of 2003.

The endowment numbers seem to contradict the swell in matriculation; it seems logical that more students would mean more money. The tepid economy of the 21st century, however, has melted the peak at which the endowment stood.

In spite of the economic woes of the nation and the university, more students are producing a higher operational yield.

According to the 2002 Financial Report, “Increased enrollments in the college and conservatory are generating additional revenue.”

The numbers paint a clearer picture of this additional revenue. From 2001 to 2002, the revenue from tuition and fees jumped from almost $15 million to over $21 million, a 40 percent increase. This jump in income was 10 times higher than the increase in total operational expenses.

The extra funds that accompany new students do arrive with a significant cost. Students need housing, and as Hiett Hall demonstrates, building new structures costs the university millions of dollars.

Moreover, to keep the desired student-faculty ratio, Lawrence must hire more teachers. This also comes at a price, as the nearly one million dollars per annum increase in instruction and research fees since 2000 illustrates. This rate of increase is considerably higher than the relatively static financial activity in the same area during the previous decade.

The financial aid office disbursed $11.3 million in 2000 and projects a figure of $14.6 million for 2003. The department has a good history of staying under budget, but the growing Lawrence population makes it harder to meet need and operate within the set fiscal boundaries.

The direct effects of the larger student body appear firsthand in the checkbooks of Lawrentians. For each of the last three years, students held roughly 2,000 on-campus jobs. Already this year, there are 1,154 jobs that students occupy. A term one number this high suggests a year-end number well in excess of two thousand.

Ultimately, the augmentation of Lawrence’s student population has less impact on finances than do the university’s stock interests. But as Lawrence continues to face the cold economic climate, the 1,412 enrollees present themselves and the institution with new budgetary challenges.