Lawrence University’s Briggs Hall was burglarized over the weekend, the culprits making off with more than $10,000 worth of audio/visual and computer equipment.According to Bruce Hetzler, professor of psychology and Briggs Hall Coordinator, items were stolen from room 317, a third floor seminar room, and 223, the computer lab on second floor.

The theft was discovered Sunday night and was subsequently reported to the Appleton police.

Hetzler reported that in room 317, almost all of the a/v and electronics equipment was taken, including the VCR, DVD player, computer equipment, and the ceiling-mounted projector. The only equipment left in the room were the wall-mounted speakers.

Room 223 also had the ceiling- mounted projector stolen, as well as computer equipment.

“They came prepared,” Hetzler said, noting that the VCR and DVD player were in a padlocked cabinet and the projectors had cable locks.

“They sawed through the padlock. A bike chain-type lock was also sawed through,” he said, referring to the cable locks that secure the projectors and computers.

Hetzler also noted that the burglary immediately affected a change in the locking policy for rooms in Briggs. Both the rooms that were burglarized had allowed 24-hour access. Hetzler said that the policy for Briggs is now that all rooms are to be unlocked only when a Briggs Hall monitor is on duty.

According to Steve Armstrong, systems administrator in computer services, the equipment stolen had a price tag between $10,000 and $13,000. The bulk of the expense was the two projectors, which he said make up about 70 percent of the total cost.

Traditional tracking of equipment of this sort through serial numbers does not often result in the equipment being found, meaning the equipment taken from Briggs will likely not be recovered, according to Armstrong.

He estimated the cost of replacement for the equipment to return the rooms to their fully functional state would be around $13,000. Insurance would probably cover less than $10,000 because of the diminishing value of computer equipment.

Armstrong did say that replacement equipment has already been ordered, and said that the rooms would be back up and running shortly.

Computer services will be installing alarms on the new equipment as well as introducing other security measures, including placing cages over the projectors to prevent further theft. 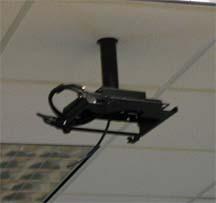