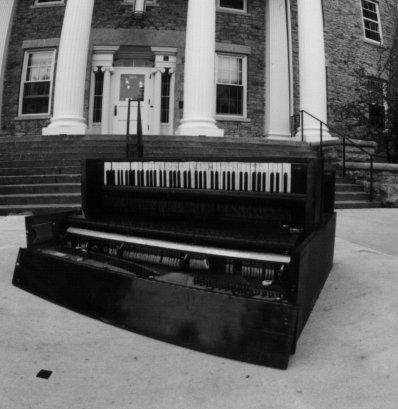 On Saturday, May 5, at 2:00 a.m., Lawrence Security discovered an upright piano taken from Heid Music placed atop the Lawrence seal in front of Main Hall.Last week, Heid put an old piano in the back of its store with a note on it reading “could take me,” according an employee in the music store’s piano department. The dilapidated piano was intended for the dumpster or anyone who wished to take it. Instead, the instrument remained atop the seal until being removed on Monday by Bob Guzman of Campus Services, when the proper lifting devices could be found.

Remaining in the center of campus for two weekend nights, the piano’s condition worsened each evening. When security removed it, it was missing a top, had keys that were chipped off and stuck down, and had been banged up, knocked over, picked back up, urinated on, and knocked back over again.

What remains to be seen is the reason behind the placement of the piano. The most likely explanation is that it was merely a prank played by either Lawrence students or other members of the Appleton community. However, certain details of the piano tend to lead one to enigmatic conclusions.

Three pieces of paper were placed on the front and sides of the piano, each of which featured a drawing of a smiling man with a moustache and a barcode on his head.

Dupois, who denies any connection between himself and the piano or posters in front of Main Hall, believes that the piano is art. According to Dupois, it could represent “the materialistic aspect of the Lawrence music performance degree.”

Freshman Bob Schwartz commented, “pianos are on the inside, but not in this case. It’s a shift in view point.” He too expressed belief that the piano is art.

At press time, no further information on the meaning of the piano on the seal was available.