Participants in this year's Earth Day festivities had the opportunity to tie-dye shirts. Lawrence students and guest Peter Siegel provided music during the celebration.
April West 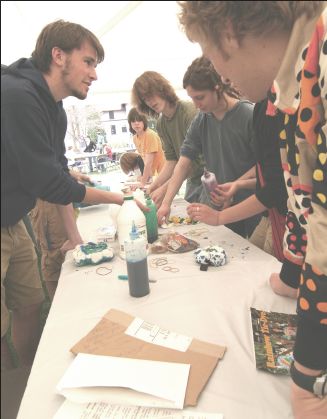 Greenfire hosted Lawrence’s eighth annual Earth Day Festival was held Saturday. The day began with a traditional 9 a.m. group trash cleanup of the north bank of the Fox River.
Food and activities were provided on Lawrence’s Main Hall Green in the afternoon. Students and other attendees listened to performances by Lawrence musicians while dining on veggie wraps served with a vegetable side salad.
“Earth Day is not just a day for advocating awareness, but for getting people involved,” explained Greenfire member Alex Weck.
“Providing information is a good way for people to begin to make informed choices;” continued Greenfire co-president Peter Maldonado. “We wanted kids to get outside, enjoy good food and music, and see what impact their choices have.”
Maldonado explained, “We tend to focus on food because it is something basic that all college kids enjoy, and it can be seen as a symbol of something that is commonly taken for granted. We hope to make people more aware of how they got the food and where it came from.”
There were a number of educational booths from both on- and off-campus groups present at the Earth Day activities, including Biodiesel at Lawrence University, the Sierra Club, horticulture club and geology club.
The opportunity to tie-dye shirts was also available, as well as a hybrid car that people could view. There were also activities throughout the day in the Sustainable Lawrence University Garden and the first floor Briggs greenhouse to get both ready for spring.
Environmental activist and singer/songwriter Peter Siegel performed from 2-4 p.m. in the Wriston Amphitheater. Siegel’s music, which has been dubbed “radical space age vaudeville,” ranged from blues, swing and hip hop on the guitar, to traditional fiddle tunes on his banjo and mandolin.
Siegel’s influences include Pete Seeger, Miles Davis, Run DMC and TV theme songs. He first made a name for himself as a member of the Hudson River Valley’s Harmonious Hogchokers, singing original songs about political and environmental issues.
Earth Day is a national holiday created in 1970 by then-senator Gaylord Nelson, a Wisconsin native. The establishment of Earth Day as a national holiday began with Nelson’s disappointment that the state of the environment was not an issue in the politics of the country.
Nelson persuaded President Kennedy to go on a five-day, 11-state national conservation tour in September 1963. This event did not help put environmental concerns on the national political agenda, but the idea behind Earth Day grew from it.
Nelson believed that the combination of energy from the student anti-war protests and environmental concerns of the public could create a large enough demonstration to force environmental conservation into national politics.
Once word got out, there was an outpour of support from all around the country. More than 20 million demonstrators appeared in Washington D.C. on April 22, 1969, to show their concern for the environment, creating the first Earth Day. 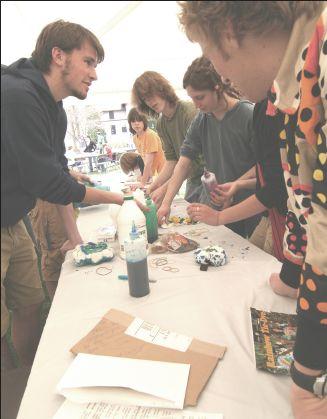