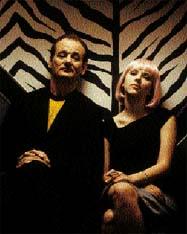 Bob and Charlotte take a breather after late night karaoke.

In the months leading up to Lost In Translation‘s arrival in Appleton, I read everything I could about the film. Trailers gave the impression of a beautiful, intelligent seriocomedy that marked the maturity of its writer-director and the immense talent of its stars. This weekend I was finally able to see it myself… and found that everything I’d heard was true. Sofia Coppola’s poignant, brilliant study of isolation and connection in unlikely places was well worth the wait.

Bob Harris (Bill Murray) is an aging movie star who finds himself alone in a glittering, intimidating Tokyo, shooting Suntory whisky commercials by day and escaping a fading career and marriage by night.

Charlotte (Scarlett Johansson) is a recent Yale graduate who’s followed her photographer husband (Giovanni Ribisi) to Japan, only to be neglected for work and celebrity (i.e. an appropriately ditzy Anna Faris).

Days and nights alone in the city with nothing to do but laze about her room and wander the unfamiliar streets leave Charlotte questioning the direction of her life and, like Bob, the future of her marriage. They happen upon each other one night at the posh hotel bar and quickly bond over shared insomnia and discontent.

Bob and Charlotte break out of their hotel-prison, running hand in hand through the karaoke bars, strip clubs, temples, and hotel rooms of modern Tokyo against a backdrop of glowing neon signs and cacophonous crowds.

The result of this whirlwind tour is not the cheapness of a one-night stand, but the poignancy of an unspeakable kinship that must, upon the week’s end, resolve into memory.

The relatively simple plot is made indescribably rich by the believability of Murray and Johansson. It isn’t just the incredibly natural dialogue, but the unspoken interactions that so effectively create the mood of heartbreaking joy.

Though the relationship between Bob and Charlotte eventually flirts with the romantic, Coppola resists the clich and restricts their bedroom antics to television watching and late-night talks. Both characters are mature enough to realize the inappropriateness of any physical consummation, which makes Bob, Charlotte, and the dynamic between them much more interesting. The depth of their emotional closeness is intense enough to render the smallest touch-Bob’s cautious pat on Charlotte’s foot, for example-more tender than any lavish on-screen kiss.

This high potency of this affection and restraint can only be attributed to the magnificent performances of the leading actors.

Johansson’s maturity is, undeniably, what makes Charlotte such a complex and appealing character. She is distressed and confused, but not whiny; interested in Bob, yet not lustful. Charlotte is at once innocent and wise; simply contrast Johansson’s sidelong glances at Murray with her composure during their goodbye. The product is a picture of one beautifully complicated-yet believable-ingnue.

Even more impressive than Johansson is, of course, Murray, whose portrayal of Bob Harris takes his work as Rushmores Herman Blume to the next level. This is Murray at his absolute finest.

At times he’s uproariously funny; it’s a Bill Murray movie, and we’re used to that sort of thing. But underneath all of the comedy is an overwhelming sadness. Look deeply enough into Bob’s eyes and you find the brand of poignant melancholy found only in funnymen. His karaoke rendition of “More Than This” definitely has potential to draw both laughs and tears, as Bob stumbles through the tune exhibiting more vulnerability than I’ve seen on-screen in quite some time.

Murray is so effortless in his delivery, it is almost as if he isn’t really acting at all, but portraying an alternate version of himself. Realistic, bittersweet, and profound, without being clich, Murray shines.

According to Coppola, there was no choice in casting Murray as Bob; without him, she would not have made the film at all. This do-or-die attitude, in addition to the film’s incredible delicacy and consistency of vision, is the mark of a driven and mature director.

Beautifully photographed, Coppola’s Tokyo is at once glittering and somber. Her camera moves through the metropolis with the grace of a former citizen and the empathy of a former tourist. So effective is Coppola in creating the mood that one is content to merely watch the plot simmer.

Coppola-along with her cast-has produced a truly memorable film that will leave audiences eagerly anticipating future projects. The unique combination of wit and wistfulness makes Lost In Translation a joy to behold. A