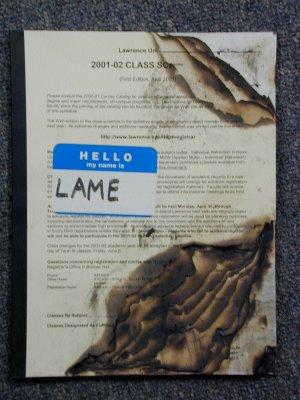 Last week, a number of administrative offices and individuals on campus received what initially appeared to Dean of Admissions and Financial Aid Steve Syverson to be an ominous, potentially threatening piece of mail via the campus delivery system. Inside plain, unmarked interdepartmental envelopes were burned 2001-2002 course catalogs, apparently crafted to protest anonymously some aspect of the course catalogs or educational standards at Lawrence. The course catalogs had been charred on the front and had `Hello My Name Is’ blue nametags affixed to the covers. Each nametag had a unique message written on it in black magic marker. The messages ranged from the “Pathetic Course Catalogue,” “You can do better,” and “Lawrence has lowered their standards,” to the succinct “Lame.”

Syverson noted that, from this alone, it is difficult to pinpoint precisely why the maker of the catalogs chose the messages he or she did and what that individual wished to say.

The significance of the recipients also remains somewhat unclear. School officials estimate that eight to ten of these catalogs had been defaced in a similar manner and sent to various destinations around campus. The current known recipients include Dean Nancy Truesdell, Dean Martha Hemwall, Wilson House, Raymond House, President Warch, and the Registrar.

Syverson received the copy sent to Wilson House and was the first to notify the Lawrentian of the incident. He was confused as to why an individual would chose this method of expression.

Syverson characterizes the act as “overly negative and ineffective,” stating that he had hoped the Lawrence community would provide an environment conducive to open discussion and effective means of accomplishing change. Syverson believes this method resulted in little more than puzzlement for most recipients. Syverson speculates that the meaning behind the catalogs could range from a change in format of the actual book and the new numbering system, to a change in the general education requirements, to an environmental protest against the amount of paper used in the book. The specific intent of the sending of the catalogs remains unclear.