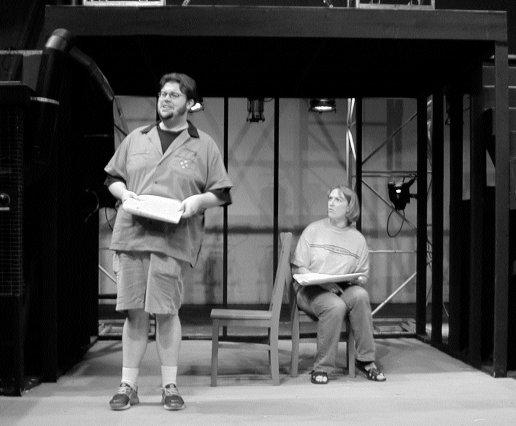 Students expecting a laugh a minute comedy on the main stage at Lawrence this term may be surprised with the intriguingly dark subject matter of this spring’s production of Machinal. Author Sophie Treadwell was a well-known actress, novelist, feminist, and war correspondent of the twenties. She worked through writing to raise the social consciousness of women. Machinal deals with a young woman who feels trapped in the social roles of her time and eventually rebels against them.

Based on an infamous court trial from the 1920s, it covers the trial and punishment of a woman who, trapped in the submissive gender roles of the time, murders her husband and is sentenced to death by electrocution. But this show gives more than a run through of the case. Machinal builds on the inner workings and emotions of the young woman, portraying them in a very external fashion. Through visual, audio, and textual aspects the audience is able to view the internal struggles of, as put by Treadwell herself, “an ordinary woman.any woman.”

The play itself is formatted in an unusual fashion. It runs through nine episodes, each with a separate setting showing a different aspect of the main character’s life. Each element builds to present the motives and intentions of the young woman. These aspects in themselves are intriguing. For example, the characters in the play are given very generic titles (such as “stenographer” or “telephone girl”) instead of names.

“It’s really used to give a very stereotyped generalization of the characters and gives an unrealistic setting to the scene,” said Paul Hurley, director of Machinal and several other shows during his time at Lawrence. “It utilizes very rhythmic, mechanical styles of speaking and acting, which is unique. Everyone is used to the kitchen sink style of drama, where everyone is searching for the actor’s motivation and thinking. But here the motivations are pretty clear-cut, so you get a lot of interesting devices that are used to show the character against her specific environment. Then all of a sudden you get an overload of images and you get this portrayal that is as close as you can get to what is actually going on in [the young woman’s] mind.”

The play also presents the author’s opinions on the industrialization of culture. Through the rhythmic actions and speaking she sets a background that lets the audience feel the mechanical tone of the piece. The name Machinal itself (meaning “automatic” in French) gives a hint as to the author’s views of the society during those times.

The show was first released in 1928 and was largely a success. It was on Broadway and was partially responsible for the launch of a then unknown Clark Gable. But despite it’s popularity, it eventually fell out of common repertoire. It went largely undiscovered for nearly sixty years until a successful revival during the 1990 New York Shakespeare Festival. Due to this popularity it was then produced by London’s Royal National Theatre in 1993. Since then the show has enjoyed multiple successes and is predominately regarded as an excellent contribution to the American stage. Along with this play there has been a recent interest in other plays by Sophie Treadwell, but although she wrote over 40 plays, most are un-heard of and un-produced.

Lawrence’s production of Machinal stands out from the usual main stage show because of its student-organized nature. This show was produced as the senior projects of five of Lawrence’s theatre students. Each student presents a different talent and specialization to the group. The show features student direction by Paul Hurley, Cori White in the lead role of young woman, set design by Jamie Le Blanc, light design by Ryan Marx, and costume design by Emily Rohm. The cast comprises 19 members, all of whom are students at Lawrence. All things considered, Machinal looks to be a shocking event that leaves the audience with plenty to think about.

Ceilidh Mar Tom Gilmore and Cori White rehearse Machinal. (Ryan Marx) Students expecting a laugh a minute comedy on the main stage at Lawrence this term may be surprised with the intriguingly dark subject matter of this spring’s production of Machinal. Author Sophie Treadwell was a well-known actress, novelist, feminist, and war correspondent of the…