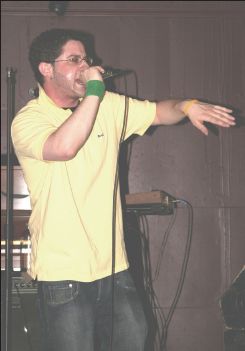 Lawrence alumnus Jed Spiegelman, ’04, rapped Saturday with Miss Fairchild, a three-man hip-hop group from Chicago, at the Underground Coffeehouse. The crowd nodded their heads and occasionally jumped to the beat, which was pumping loud enough to be heard from upstairs.
Originally from Boston, Spiegelman – who is known musically as Lipschitz – is now living in Chicago while working and playing music. Last year he produced his first album, “Jedsed,” and is now promoting it, performing around the country.
He and the members of Miss Fairchild have a long past, having started a garage band together as friends in high school. They picked it up again after they graduated from their different colleges.
Spiegelman describes his music as “something that you’re not going to hear every day, especially because of the influences that I’ve listened to.” A trumpet player while attending Lawrence, he lists Lee Morgan, Miles Davis and Freddie Hubbard as his musical inspirations.
Daily life also inspires Spiegelman. “What I see every day, what I hear when I turn on the radio, I take that and put it where it’s at,” he commented.
As proclaimed on their website, the members of Miss Fairchild consist of “Daddy Wrall, lead vocals and percussion; Samuel P. Nice, turntables and hot sauce; and the The Great Dunlap on flute, keyboards and hype.” Miss Fairchild’s mascot is a female mannequin, who joined them onstage Saturday.
Skyler Silvertrust commented, “They were great; they had good rhymes. The best part was that they were excellent performers as well as musicians, which is important for a good show,” said the sophomore. “They were theatrical, interesting musically and were fun. Even though there weren’t a ton of people they made it seem like a big deal.”
Musically unique because of their style and various instruments – including a flute and a saxophone – that were whipped out by Nice at one point, Miss Fairchild performed some interesting songs. An introduction to one song began, “This song’s about hair . everybody’s got it.” Silvertrust also commented on Miss Fairchild’s style. “They were clearly good musicians – the backups were excellent, some of the raps had three parts, and the flute was excellent. They were different,” he said. “It was very accessible music. You didn’t feel like you had to be a part of the culture to enjoy it, you could just sit back and laugh with them. 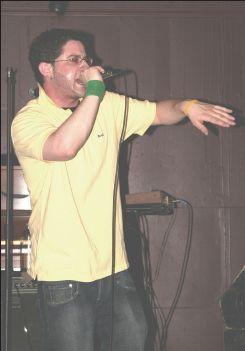