Michael Papincak is a member of the College Republicans
Benjamin Pauli 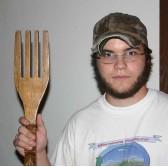 Last month, students Ruth Malhotra and Orit Sklar sued Georgia Tech for what they claimed was the censoring of their rights to publicly denounce homosexuality. Malhotra, chair of the university’s College Republicans, has recently been under scrutiny for denouncing homosexuality as sinful and for protesting the school’s production of “The Vagina Monologues,” claiming it encouraged a type of feminism that destroys the family. Most recently, Malhotra has been under fire for a letter she wrote to Georgia Tech’s Pride Alliance calling the gay rights group a “sex club” and stating that it was “ludicrous” that they received funding from the university. For such an action she was disciplined by the dean and is now suing the school, claiming that her rights to free speech and religion were violated because she was punished exclusively based on her speech. She is also asking that the university rules restricting intolerant and hateful speech be struck down.
This case pits two very fundamental rights against one another – the right of citizens to freely express themselves against the right of the public to be free from hateful speech. In such a case it would be easy to censor such hate-filled expression, but such an action would have dire consequences. Perhaps the most important freedom granted by the United States is the right of all people to freely express their beliefs. This right is not limited to the politically correct or those that preach tolerance. So while such anti-gay rhetoric is disgusting and hurtful, it, like the speech of the KKK or neo-Nazis, must be protected. Allowed speech must not be left to the political tides to determine its acceptability. Otherwise, minority views, including those that encourage peace, justice, acceptance, tolerance and social change, could be censored. Instead, we must vigilantly defend the right of all people, even those with which we disagree, to freely express their beliefs.