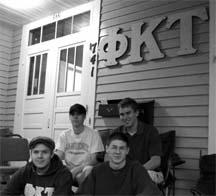 Four Phi Kappa Tau members pose by the front door of their new residence. This is their first year in a different house under the formal group housing plan. (Julien Poncet)

Since the implementation of Formal Group Housing in the fall of 2002, many groups on campus have been adjusting to the changes in original and cooperative ways.One such group the Phi Kappa Tau, who have been striving to organize a Halloween Party that will maintain their tradition of celebrations.

This year, the new Phi Tau home does not have enough common space to facilitate a party, so the Phi Taus have turned to new ideas. After brainstorming, they determined that the best option was to have their party in the basement of Sage Hall.

There will also be a tent set up behind Sage featuring a professional DJ and a heated dance floor. An outdoor party in October will be a unique event at Lawrence and according to the fraternity, preparation for the project as a whole has been a challenge.

Many administrators and community members had to be included in the plan. Residence hall director Chris Cook approved the party, and the Phi Taus have been warning both Sage residents and neighboring homes about the upcoming bash.

Social chair Brian Zaander mentioned both Paul Shrode, associate dean of students for campus activities, and Nancy Truesdell, dean of students, as being especially instrumental in preparing for the Halloween festivities.

The Phi Taus also have to deal with the actual execution of the party. Publicity is important since students need to be aware of the party’s location.

The preparations also require more organization. When it was possible to host a party in their own house, the Phi Taus had plenty of time to set up and tear down; now all decorations and preparations will have to be completed quickly and efficiently.

Zaander is not concerned. “The dedication and help of all the members of our chapter have made these problems irrelevant,” he said. “The time and hard work displayed by our guys has been outstanding.”

Overall, the Phi Taus are satisfied with their new home and eager to take on the challenges associated with it. Zaander commented, “The best thing about the new housing arrangement is that it forces us to be creative. All of our members are dedicated to doing the things we always have.

“We strive to provide this campus with excellent social and philanthropic events. In our old house it was very easy to do things exactly the same as they had been done before. Now we are forced to rethink everything.”

However, the Phi Taus believe that their hard work and creativity is paying off and the Phi Tau party should be an event that turns heads in the Lawrence community.

In fact, it already has. Truesdell expressed pride for the exemplary way that the Phi Taus, and other groups like them, have adjusted to the new housing system.

“I think it’s good for the campus to have a change and to breathe a little life into things that have become not just traditional, but in some cases, routine,” she said. “It’s nice to spice it up a little bit.”

Beth McHenry Four Phi Kappa Tau members pose by the front door of their new residence. This is their first year in a different house under the formal group housing plan. (Julien Poncet) Since the implementation of Formal Group Housing in the fall of 2002, many groups on campus have been adjusting to the changes…