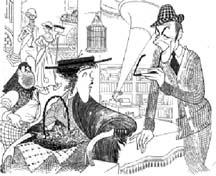 GroupÂ´s production of ShawÂ´s classic play at PAC falls short of being spectacular.

The American Players Theatre’s production of Bernard Shaw’s Pygmalion, directed by James Bohnen, fell short of stunning this past Sunday at the Fox Valley Performing Arts Center. The APT, a Spring Green, Wis.-based equity company, took the stage with energy and gusto. They failed, however, to capture the pompous, postured, tongue-in-cheek humor and attitude essential to the Victorian era and to the characters of the play, such as Professor Higgins and London’s upper-class socialites.

Instead, the APT’s performance chewed away at the humor in poor efforts to go over the top and outdo each other’s deliveries.

Forced moments and unnatural deliveries distracted from any charm the play possessed as well as any affection suggested between the characters of Eliza Doolittle (Colleen Madden) and Henry Higgins (Brian Robert Mani).

Only Eliza’s father, Mr. Doolittle (Jim DeVita), and Mrs. Higgins (Tracy Michelle Arnold) stepped in occasionally to pull the story back into its historical context and provide the greater moral message of the play. They also varied the rhythm of the show, which, for the most part, plowed ahead, oblivious to any sense of sincerity or genuineness.

The show Pygmalion is Shaw’s retelling of Ovid’s story of transformation, as well as the predecessor of the infamous My Fair Lady musical version. The story follows Henry Higgins’ efforts to transform Eliza Doolittle, a cockney “guttersnipe,” into a duchess in six months. Set in Victorian London, the show addresses issues of poverty, the role of the emerging middle class and “middle class morality,” and the redefining of women in society.

Executed without flaw and with an obvious professionalism, the show still lacked believable performances of anything besides forced humor. The actors only scratched the surface of the complicated emotions between Eliza and Henry Higgins, leaving the audience confused in the final act when the show implied a great struggle in affection for each other that was not expressed at all throughout the show.

APT’s performance fails to offer anything new or interesting to an already well-known story that you’d be much better off renting from your local video store.