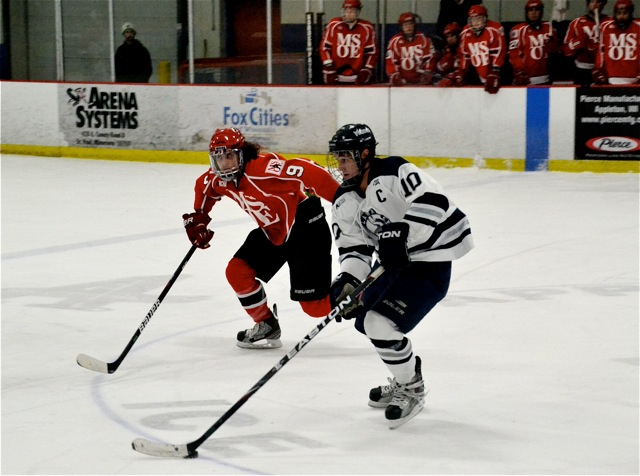 The Lawrence men’s hockey team fell short in two games against the Milwaukee School of Engineering Raiders last weekend. They lost 3-2 on Friday night at the Appleton Family Ice Center and took the defeat 4-2 at the Kern Center in Milwaukee. The Vikings’ overall record now stands at 5-9-3 with a 4-5-3 record in Midwest Collegiate Hockey Association conference play.

Playing their first home game of Winter Term, the Vikings were greeted with packed stands as students and the community came to support them. The game got off to a rough start when the Raiders scored just nine seconds into the match. The score would remain 1-0 for the remainder of the first period. However, it did not take long into the second period for the Vikings to score. About two minutes into the period, sophomore forward Huck Saunders scored his second goal of the season off of assists from sophomore forward Paul Zuke and senior defenseman Jesse Byam-Katzman. MSOE then countered with a goal seven minutes later to regain the lead.

The fans were then treated to a very physical match with plenty of scuffles and some punches being thrown after the whistle. Within the last 10 minutes of the second period, 13 penalties were committed, and an MSOE player even received a game misconduct. After the biggest brawl of the night was sorted out, the Vikings found themselves on a 5-on-3 disadvantage and the Raiders capitalized with a goal to give them a 3-1 lead going into the 3rd period.

Lawrence got back into the game when junior forward Phil Bushbacher notched his fifth goal of the season off an assist from junior forward Brad Scurfield to trim the lead to 3-2. However, the Vikings were unable to equalize the match before time expired and took their third consecutive 3-2 loss.

The next night the Vikings got off to a better start as sophomore forward Derek Brickan scored the lone goal of the first period to give Lawrence a 1-0 lead. The goal went unassisted. Early in the second period, the Raiders countered back with a goal of their own to tie the game. Senior forward Reijo Wahlin then scored his first goal of the season off an assist from senior forward Jonathan Bellotti to take the lead, however MSOE tied the game two minutes later. With the game tied going into the third period, MSOE pulled away with goals early and late in the third period and took the 4-2 victory.

The Vikings ended their toughest stretch of the season with four very close losses to nationally ranked teams in MSOE and Adrian College. Commenting on the series versus MSOE, sophomore forward Nate Scurfield said, “They were two hard fought battles. They executed on their chances more than we did.” The Vikings outshot the Raiders in both games, with an overall advantage of 81-61. When asked how the team will rebound mentally after these losses, Scurfield answered, “Though we have lost four close games, we are arguably playing the best hockey we have all year. We will go back to work this week in preparation for Northland.”

Lawrence will travel to Ashland, Wisc. this weekend for two games against the Northland College Lumberjacks.