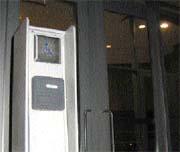 Several break-ins have made Lawrence revamp their security practices. Shown here is the Simplex system used to moniter traffic to Youngchild Hall.

Two weeks ago, more than $10,000 worth of electronic equipment was stolen from Briggs Hall. The Briggs theft was not an isolated incident. A projection system was also stolen from the Music-Drama Center late on Monday, Oct. 27.At 5:30 a.m. Tuesday, Oct. 28, a maintenance worker discovered that the projection system had been stolen from Room 259 in the Music-Drama Center. The room was promptly locked until Appleton Police arrived.

Police spent several hours at the Music-Drama Center and were able to collect a set of fingerprints and a set of footprints. Police also dusted for fingerprints in Briggs Hall on Oct. 19, but were unable to find any.

A similar robbery took place one week before the theft at Briggs Hall at a church located only a few blocks from campus. On Sunday, Oct. 12, two new computers were stolen from the church. Several older models were left alone.

No signs of forced entry were discovered. The perpetrators apparently entered by using a key or picking a lock. The locks that protected the computers were cut, just as the locks were cut in Briggs Hall. Once again, the crimes are not officially related, but bear many resemblances.

A new projection system has already been installed in the Music-Drama Center and alarms have been installed to prevent any future theft. Briggs Hall now closes at midnight and all classrooms, seminar rooms, and unmonitored computer labs are locked at 10 p.m.

Ellen Mitala, senior administrative assistant of the conservatory, explained that, unlike Briggs Hall, the conservatory cannot make significant changes in locking policy. The Music-Drama Center needs to be open almost constantly for rehearsals and student practice.

Students and professors alike are upset that the robberies in both the Music-Drama Center and Briggs Hall have occurred. Many classes used the electronics equipment frequently and the absence greatly detracts from classroom learning. Another significant impact is the effect the thefts have on the reputation of the student body.

Anthropology professor Peter Peregrine said, “I was discouraged to hear that some of my colleagues had ‘lectured’ students about the thefts. I don’t know any students who I think would have done this, and I am sure that if other students knew what had happened, they would not hesitate to come forward. What ever happened to being innocent until proven guilty?