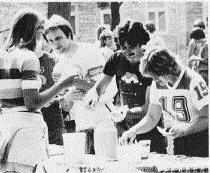 While many Americans see the 19th of May as Armed Forces Day, Lawrentians will be taking the time out to celebrate the Ormsby Hall sponsored “Zoo Day: 2001.” An annual tradition, “Zoo Day” began approximately two decades ago and flourished until the early 90s when, for an unknown reason, officials put an end to the celebration. It lay dormant until last year, when Ormsby RLAs and the RHD decided to resurrect the old custom with a campus-wide picnic and a couple of sporting events.

This year, however, both Ormsby staff and residents are going all out to produce the most festive “Zoo Day” in the history of Lawrence. Numerous planned “regression activities”—pastimes that strong memories of childhood—include everything from wading pools and sidewalk chalk to pie throwing and a big “jumping castle.”

But “Zoo Day” is not just about freeing one’s inner child; this year, it is also a service event. Certain activities will be ticketed (ticket prices being a mere 25 cents), and all proceeds given to Harper House, a home for victims of domestic violence.

In addition to the numerous activities planned, a campus-wide picnic will be held from 4:30-6:30, with food by Downer and “mocktails” by BACCHUS. The menu includes grilled chicken breast, veggie burgers, baked beans, chips, watermelon, and lemonade (traditional picnic fare). Because Downer will be closed for the evening, it is important that attendees bring their IDs so that the meal can be included in their account (this applies to fraternity members, as well).

Music will be provided throughout the day. From 2:00-6:00 the boys of Ormsby’s second floor will be deejaying, and the Sambistas will be making an appearance at an unspecified time. At 7:00, Lawrence’s very own Bad News Jones plays followed by The Committee from 8:30-10:30.