Lawrence&s own version of the golden arches, the sculptures, which are formed by interlocking LU&s, was created Rolf Westphal. Next to the sculptures are several small towers, and many students do not realize that inside the towers are different landscape models.
Ceilidh Mar 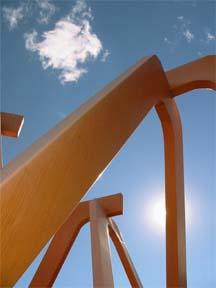 Lawrence&s own version of the golden arches, the sculptures, which are formed by interlocking LU&s, was created Rolf Westphal. Next to the sculptures are several small towers, and many students do not realize that inside the towers are different landscape models. (Julien Poncet)

A combination of pieces from the LU Anthropology Department and from Beloit College’s Logan Museum of Anthropology will be the subject for the upcoming Wriston Art Gallery exhibition, “North, South, East, West: A Survey of Native American Artistry.” The collection will be combined with several other exhibits, including Hm. Pechstein, Holzschnitte 1919, (Travel Book) and Portraits by Noah Fischer.

Hm. Pechstein, Holzschnitte 1919, (Travel Book) is a permanent part of the Wriston Art Galleries collection. This portfolio by Max Pechstein, a German artist, is a series of prints, inspired by his travels in the South Seas area right before World War I.

In 1919 Pechstein compiled his prints, which are based on memories of the primal quality of art in the area at the time and on friends and artists in the South Seas. The nine pieces and portfolio cover reflect a tribal influence, unique because it was changed shortly thereafter by outside influences of the war.

These pieces were donated to Wriston by La Vera Pohl, along with the rest of her extensive collection. Pohl was an art historian and collector in pre-World War II Germany. She collected work from German artists but especially those of German expressionists.

Expressionist work was, at the time, quite controversial because of the modern approach it used. Hitler disliked expressionist art, calling it “degenerate art.”

When Pohl passed away she left her collection to Milwaukee Downer College, which had just combined with Lawrence College to form Lawrence University.

Fischer’s exhibit focuses on images of famous people, and uses out-of-focus portraits and shadows, allowing the viewer to try to recognize the image. Fischer is currently working in New York.

“North, South, East, West: A Survey of Native American Artistry attempts an ascetic view of the sampling of pieces from many tribes, looking at pottery, beadwork, quillwork, a tribal shaman rattle, clothing, and leatherwork.

The exhibits open the evening of Friday, Nov. 15, and the opening will be preceded by a lecture on the anthropological exhibit by Peter Peregrine, an associate professor of anthropology at Lawrence. A reception will immediately follow the lecture.

The exhibits will be on display through Dec. 15 during gallery hours, with the exception of Nov. 28-29, when the gallery will be closed for the Thanksgiving holiday.