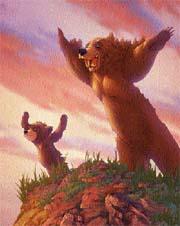 Who says cartoons are just for kids?I went into the theater fully prepared to hate this movie. Not only have I come to hate Disney, but also the previews I saw didn’t make Brother Bear look like anything special.

The film surprised me on both counts.

This is probably the best Disney movie since The Lion King.

After unexpected tragedy, Kenai (Joaquin Phoenix) seeks revenge upon a bear, which he believes responsible. In succeeding, he angers the spirits who in turn transform Kenai into a bear himself in order to understand the mistake he made. Kenai must then visit the spirits to undo his transformation, along the way meeting Koda (Jeremy Suarez), a cub separated from his mother who eventually becomes a surrogate younger brother to Kenai.

Don’t discount Brother Bear‘s potential just because it’s a cartoon. The plot has more depth and emotional maturity than most live action films I’ve seen. Although the plot is simple and relatively predictable, its components are woven together so masterfully that Brother Bear surpasses any and all expectations you might have for it. If you think you cried hard when they shot Bambi’s mother, you won’t believe the catharsis that accompanies the ending to Brother Bear .

The film captivates audiences, primarily, with its visual magnificence. The landscape imagery is unlike anything I have seen in any animated film, and the work done by animators with the aurora borealis and the spirits part of it is indescribable.

Even the humor in Brother Bear is noteworthy, particularly because it targets not kids, but adults. More than once I found myself one of the few cackling over and homage to Flock of Seagulls or Monty Python. The movie’s real comedic charm, however, lies with the two Canadian moose Rutt and Tuke (Rick Moranis and Dave Thomas), perhaps the most entertaining and hilarious Disney sidekicks to date.

Even great films have their low points, however, and for Brother Bear, it’s the music. Unfortunate, since the mark of any good Disney film lies in the strength of its score. In this case, the songs follow the style of Tarzan: sung by Phil Collins rather than the characters themselves. Tarzan, however, had a remarkable soundtrack, and Disney’s shift from convention hardly stopped millions of children – and adults – from clamoring to purchase the soundtrack. While I expected better from the Oscar-winner, I found the music in Brother Bear wholly unworthy of the great film in which it appeared. The lyrics are ridiculously inane, and rather than enhance the movement of the plot, the songs dramatically detract from an otherwise exceptional film.

The movie may be geared towards kids, but Brother Bear contains more than enough emotion, wit, and artistic presence to impress even the most skeptical adult.

Do not miss this film. A