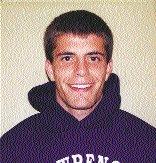 Valerie Curtis won the first conference title of her career this past weekend at the MWC Championships at Grinnell.

Curtis ran to victory in the 5,000 meters in a time of 18:49.08 seconds, beating St. Norbert College’s Julie Deyo by less than two seconds.

Don Smith made it a clean sweep in the 800 meters this season.

The Appleton native won the 800 at the Midwest Conference Championships this past weekend at Grinnell. Smith raced to the 800 title in 1:55.71, edging Monmouth College’s Bryan Bittner at the tape.

This marked Smith’s second MWC title of the spring. He won the 800 at the MWC Indoor Championships back in March at Knox College.