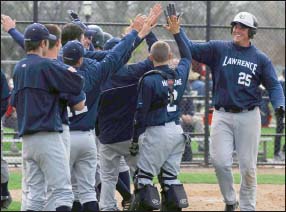 The LU baseball team traveled down to Waukesha Saturday for the opening doubleheader of a significant North Division weekend series with Carroll College. After crushing defeats at the hands of reigning Division III champs UW-Whitewater, Lawrence looked to get healthy off a struggling Carroll club (4-16, 2-7).
Game one began with some thunder from both sides; Carroll’s 1-5 brought the heat early and got to junior Chris Clouthier before he could find a groove. But Lawrence bounced right back in the second, when sophomore Bryan Rosen unleashed a two-run bomb on Carroll pitcher Chris Foley.
Lawrence’s third looked much the same as Kevin Fitzsimmons doubled in a run before being given a free pass home when Billy Bodle homered, once more off Foley.
The top of Carroll’s order proved the deciding factor, however, as they consistently reached base, leaving plenty of opportunities for run production. Carroll prevailed 7-5.
Game two in Waukesha gave Vikings fans more to cheer about as the Vikes delivered the breakout performance they had been craving. Fitzsimmons had a monster game, going 2-4 with a homer, five RBIs and two runs, recording them all before the third inning.
Rosen failed to reach base just once, scored twice and swiped a bag. B.J. Chase held Carroll’s 1-9 to just six hits and five earned over a complete game victory and at one point led 9-0. Final score: Lawrence 9, Carroll 5.
Games three and four were played in Appleton Sunday, where Lawrence hoped to end their winless streak at home. The Vikings gave up-and-coming freshman pitching talent Alex Fritsch the call for game one, and he didn’t disappoint. Through eight – count em’: eight – innings, Fritsch held Carroll to two unearned runs and allowed only seven men to reach base; less than his total innings pitched. Fritsch dueled with two Carroll veteran pitchers throughout and departed in the ninth with both squads deadlocked.
Carroll manufactured a run with two gone in the tenth to go up for good. Fritsch ended up with the no decision, but celebrated one of the best Lawrentian outings all season and the best of his young, promising career. Carroll 3, Lawrence 2.
Game four sported another magnificent pitching performance from Lawrence, which has recently begun to show prowess in the area. Junior Josh Richie, a cool 6 feet 7 inches, 270 pounds, was handed the ball for the series finale.
After giving up a run in the first, Richie settled down and allowed just two more over nine innings to capture the victory and earn the title of “workhorse,” at least for the day. Richie’s run support came from an experiment within the batting order, an intriguing decision by Coach Korey Krueger, which proved effective.
Bodle, a regular at the 5-spot, was bumped up to leadoff, and Andrew Wong and Kevin Fitzsimmons, Lawrence’s dominating third and fourth hitters, were moved to 2 and 3. The top of the order reached base and produced chances for the bottom of the order to drive in runs.
When the dust settled Lawrence triumphed 5-3, salvaging the split and winning for the first time this season at home.
Lawrence begins a four-game series with Beloit College April 29. 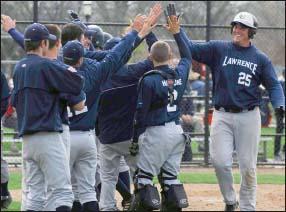