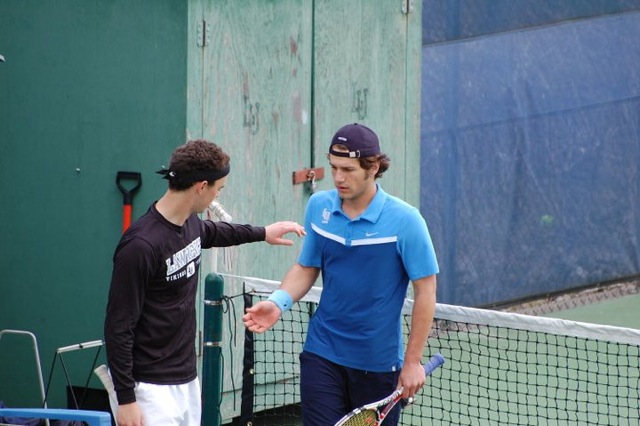 During the singles competition Saturday, junior captain Caleb Ray and sophomore Jason Dunn paced the Vikings, each placing 3rd at the No. 1 and No. 2 singles positions, respectively.Ray picked up a win in the quarterfinals, defeating Seth Pamperin of Carroll University 7-5, 6-2, but was defeated in the semifinals by Monmouth’s David Johnson.

Dunn defeated St. Norbert’s Derek Harrington 7-6, 5-7, 6-4 in the quarterfinals, but lost to Juan Perek of Grinnell College, the two-time defending conference champion, in the semifinals. Max Zlevor won his first match at No. 3 singles before losing in the quarter finals.

Other notable finishes include freshman Jeremy Andereck, who lost his first match at No. 4 singles against Monmouth — who eventually went on to win the tournament for No. 4 singles — but came back strong to win his next match and make it to the consolation finals. In addition, Bile Ali won his first match against Illinois College before taking a loss in the quarterfinals.

During the doubles competition Sunday, the Dunn-Zlevor No. 1 doubles team took 3rd place, making it to the semifinals to lose to Grinnell, who went on to eventually win the tournament, 6-4, 6-0.At No. 2 doubles, Caleb Ray and Andereck lost in the quarterfinals, but came back to defeat Jackson Vogel and Derrick Winterhack in the consolation semifinals, and eventually lost in the consolation final against Carroll University 8-6.The No. 3 doubles team of Ali and Roy Wimer defeated Ripon’s Jeffrey Mehlert and Xia Xiong 6-0, 6-2, but were eliminated in the quarterfinals against St. Norbert College.

In response to the outcome of the tournament, Ray stated that “although we did not win as many matches as we would have liked, every single person went out there and gave it everything they had in every match.”

Freshman Andereck also noted, “Conference gave me great experience playing tough, high pressure matches, which is something that will be valuable in the years to come.”

In general, this was a rebuilding year for the men’s tennis team. Ray stated that “no one did poorly. We had a lot of young players, including four freshmen, so we struggled due to inexperience. Everyone came out and fought hard for every match, but we were just not as strong as some of the other teams.However, I would rather be on a struggling team with a group of hardworking, dedicated individuals like the six that we have on the Lawrence team right now than winning every single match with Grinnell.”

Even though the season was challenging, the Vikings finished 7-13, they gained valuable experience and everyone seems excited for the years to come, with Ray noting that “we have the potential to make it to the conference tournament if everyone is as dedicated as they were this year and we just add to our great group of guys.”

With the amount of experience that the Lawrence University men’s tennis team has gained from this season, we can expect them to build upon their already-solid base over the next year, and I predict that we will see amazing things from our boys in their 2012 season.