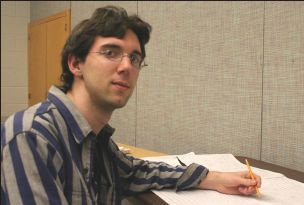 Graham Hand is a composer from the East Coast who has been zealously exploring the world of music since he set foot on campus. His most recent work, an operetta entitled “All of Me,” was composed to a libretto written by fellow juniors Aram Monisoff and Michael Papincak. The premier is scheduled for April 30 in room 163 of the conservatory, so until then here’s some words the composer himself.Where are you from and what is your major?

I’m from outside Boston. I’m in the Con with a theory/composition major and in the college with a religious studies major and maybe a theater minor.

How long have you been playing and/or writing music?

I started playing cello when I was 9, and erhu – a Chinese traditional instrument – when I was about 10. I started writing terrible punk songs when I was 13 and I have about four hours of really hideously bad songs I recorded on my computer in high school. Then first term freshman year I discovered both Ligeti and Webern in the course of a week, which changed things for me.

How would you describe your music?

I write music by plagiarizing things that I like. I like music that operates both emotionally and intellectually. I like loud noises. I like things that are dense sounding. Lately I’ve been doing a lot of things with really disjunct transitions between clearly differentiated sections – imitating John Zorn – and thinking about harmony in terms of trichordal or tetrachordal saturation – imitating Webern, although not in a serial context. I’m interested in what music can do theatrically, including in non-theatrical performance situations, and in how music and words interact. I’m interested in trying to figure out why I like the things I like and trying to combine the things I like from different kinds of music.

What musicians or composers have been particularly inspirational to you?

What do you hope to accomplish with your music?

I want to make music that some people will like as much as I like some music.

Could you tell us a little bit about your Operetta?

It’s kind of goofy, and pretty loud – for musical theater. Last year I asked a couple of guys I know to write a libretto for it, and they gave me one, and I put together some music for it over the summer. There’s a lot of messing around with genres and the ways different characters’ musics interact and play off each other. Everyone who’s singing and playing in it is really good, and it should be a great performance.

Do you have any future plans, either near or distant, for your music?

Do you have any other projects?

I have a few things. I have a couple of orchestra pieces I want to write. I want to write a string of five- or 10-minute mini-operas, with and without words, possibly including one with trombone ensemble and amplified singers on stilts or tall platform shoes. I’m also in two different bands that want to start playing later this term – a pop cover band that wants to sound really good, and a three-piece (guitar/cello/piano) rock band called Fright-Train/Sex-Train that wants to be really loud and maybe scary. 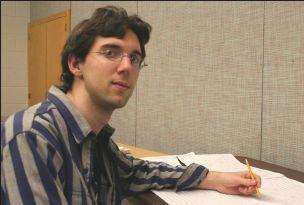