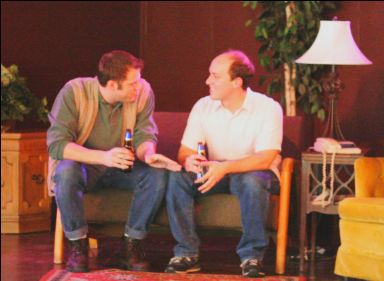 Last weekend’s Festival of Queer Arts and Aesthetics, sponsored by Lawrence’s Gay, Lesbian, Other or Whatever organization, Beloit College’s Alliance, the Alyssa Paul Maria Fund, and the Office of Multicultural Affairs brought a number of performances to the Lawrence campus.
Saturday afternoon, independent folk artist Pamela Means performed in the Underground Coffeehouse. Means is known especially for the strong political voice expressed in her lyrics and what the New York Times Magazine calls her “kamikaze guitar style.”
One of the songs performed, titled “O.D.,” stands for oleaginous diplomacy, a defunct World War I term meaning “government initiatives made on behalf of oil companies.” One line from the song reads, “The cause of economic toil / Is disruption of the oil.”
The set did not consist entirely of political songs, however. Included were love songs and some songs pulled from her “jazz project,” which will culminate later this year in a jazz CD, including her arrangement of Billie Holiday’s “Strange Fruit.”
Means, who currently lives in Northampton, Mass., pulls a lot of her material from personal experiences of growing up in the Midwest as a racially mixed lesbian. Her fifth album, “Single Bullet Theory,” was named Outmusic’s Outstanding Female Album of 2004. When asked how she would describe her music, she answered, “Funky, folky, jazzy, political, smart food for your soul.”
That Saturday evening, a combination of drag show and performance was held in Riverview Lounge. Participating Lawrentians were joined by a performance troupe from Chicago called Esoterica Chicago, who handed out pink balloons to the audience as they entered and instructed them to blow them up if anyone had ever made them feel uncomfortable about their body, gender or sexual orientation.
Esoterica Chicago’s Jessica Halem emceed the show, cracking outrageous jokes and getting the audience ready for some “kick-ass radical fucking queer shit.” Intermingled with the acts were short segments in which members of Esoterica described the reasons why their balloons were blown up, which ranged from racism to sexism and beyond.
The acts performed by Esoterica Chicago included satirical skits commenting on issues of gender and sexual orientation faced today, as well as defiant strip shows asserting the performer’s comfort with and ownership of their own bodies and identities – not to mention a memorable performance including a can of SPAM.
Several Lawrence students had acts of their own. Grant Anderson and Kate Augustyn lip-synched to “Proud Mary” in killer boots and pearls. Sara Bernstein, Shaunna Burnett, Christine Whack, Audrey Hull and Kate Augustyn performed as the “Back Door Boys” in coordinating polo shirts. Justin Severson did a Kylie Minogue impression.
Daniel Harvey’s played a rendition of “The Rainbow Connection,” accompanying himself on banjo. Audrey Hull performed an all-too-appropriate dance to “I’m Too Sexy.” And an appearance by Patrick Ehlers and Nick Anderson in drag – or, as Halem put it, “Two of the cutest straight girls I’ve ever seen.”
As a relative newcomer to the “dressing like a female” business, Anderson had to make some considerable effort in his preparation, such as creating breasts out of pudding and taking an hour and a half to shave only his left leg. The show ended with the members of Esoterica Chicago popping the audience’s balloons with sparklers – a loud and joyful popping of injustices. 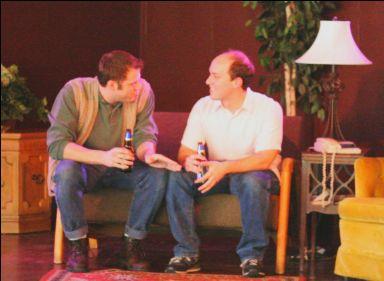