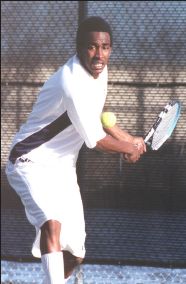 Lawrence’s No. 1 singles player, Fabrice Munyakazi-Juru has always had a calculated way of performing in close matches. To the casual observer he appears extremely mellow and even lackadaisical, rarely showing emotion on the court and always seeming to move around as little as possible.
“I think that tennis is more mental than anything,” said Munyakazi-Juru. “Being emotional distracts you from your goals. It’s all about patience.”
His philosophy is certainly paying off as of late. In his senior year, Munyakazi-Juru has tallied a dazzling record, going 6-1 against Division III opponents. He has already won as many singles matches as he did all of last season.
Last weekend he scored his biggest upset since moving to the No. 1 position, defeating Jordan Shilts of UW-Whitewater 1-6, 7-5, 11-9. Shilts is currently the No. 19 ranked singles player in the Central Region.
Concerning his peaking performance of late, Munyakazi-Juru said, “Our coach is the biggest difference this year. He always sets high goals for me.” This is an encouraging note for a team that has had four head coaches in as many seasons.
The score against Shilts is somewhat indicative of Munyakazi-Juru’s patient playing style – easing his way into the match, sometimes dropping the first set, only to turn the momentum around part way through and walk away with a victory. Four of his six singles wins on the season have seen him drop the first set.
To this, he chucklingly exclaims that dropping the first set is all about “figuring out what to do against an opponent early on” and then applying it in the latter portion of the match.
Munyakazi-Juru’s upset would be the lone bright spot of the weekend, as Lawrence saw stiff competition not only from host UWW, but also from DII opponent Winona State. Between the two dual meets, Munyakazi-Juru’s victory over Shilts would be the only point scored by the Vikings.
Lawrence now takes a 4-6 overall record into another tough weekend. On Friday and Saturday afternoons, the Vikings will play host to the No. 6 and No. 13 ranked teams in the region – Coe and Grinnell.
The load gets no lighter after these meets, either, as the Vikes play at perennial rival Ripon on Sunday. The Vikes dropped a 5-2 decision in an indoor exhibition match against the Red Hawks back in early March. The Ripon match will be the first against a MWC North Division opponent.
The conference schedule concludes after this weekend as LU heads to Carroll on Tuesday and then hosts both Beloit and St. Norbert next weekend to round out the regular season. 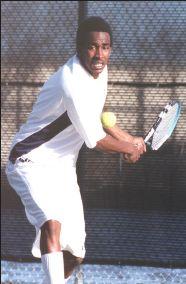