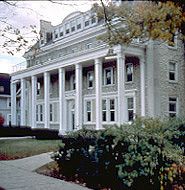 The Sage elevator and stairwell were damaged by fire recently. (lawrence.edu)

Sage Hall experienced a surge of vandalism recently, culminating in fires in the elevator and stairwell of the building, and ultimately a shutdown of the elevator.
A few weeks ago, a student set a small fire in the central stairwell, which soon got out of hand. Security was called to take care of the issue, and the stairwell is now marked by noticeable scorch marks.
Another fire incident occurred in the Sage elevator, the doors of which were already marred by less extreme acts of defacement, mainly graffiti. Physical Plant responded by shutting down the elevator, an inconvenience for students living in Sage.
In response to these and other vandalism incidents this year, all residents of Sage are being charged for the damages.
While this action has angered many hall residents, it is provided for in the Lawrence University Housing Contract. Residents had been warned earlier in the year that action might be taken if the vandalism continued.
Unfortunately, in cases of vandalism, it is often difficult to ascertain who actually committed the act. So far, the acts cannot be pinned on one individual, meaning that everyone will be charged.
Part of the reason students are so upset is that, in addition to having to pay for damages they did not cause, the actual perpetrators may not even live in Sage.
Interestingly, many of the hall’s inhabitants had no idea what happened, hearing about the fires much later or noticing the scorch marks and just assuming some sort of fire had occurred. Some residents also seemed to view the episode as funny and outrageous, and less concerning.
RLA Gus Christensen joked, “After the incident in the stairs, I’m starting to think the residents are trying to burn down the building.”
However, most residents were upset about being charged, seemingly forgetting the prior warnings as well as the housing contract. Senior Aline Drr perfectly summed up the feelings of many Sage residents when she stated, “I’m not paying that.”
It is important to note that Sage is not the only residence hall affected by vandalism this year, or any other year for that matter. All these acts of destruction have compelled the LUCC Student Welfare Committee to discuss what can be done to deter further vandalism.
While the fining procedure is already in place, the committee questions if that will be enough. It is quite feasible that security may have to become a more active force on campus.
Another idea floating around is an anonymous tip line, to encourage those who don’t want to pay damages to report incidents. 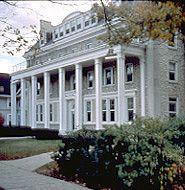 The Sage elevator and stairwell were damaged by fire recently. (lawrence.edu)