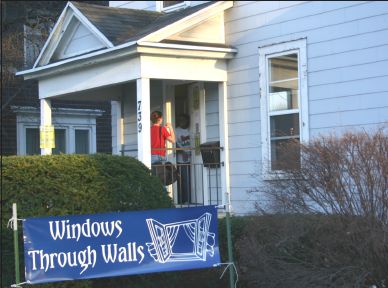 A female college student is taken advantage of by a male student after a long night of drinking. A homosexual student is assaulted verbally and physically. An anorexic woman pushes herself further and further toward danger.
These are scenarios that are played out in our country every day and were the focus of a recent program, “Windows Through Walls.” The program was sponsored jointly by the Multicultural Affairs Committee and the Office of Multicultural Affairs.
Windows Through Walls, which concluded Wednesday night, aggressively tackled issues of diversity and acceptance, exhibiting strikingly realistic scenarios that reflected a carefully crafted reverse image of reality.
The program consisted of a tour through a house on campus, each room displaying different issues affecting different people.
The first scene, titled “Affirmative Action: Twisted,” utilized an altered history to create a world with a white minority. Participants found a group of black students discussing their views on the reverse affirmative action that is a part of this world.
The parallel does not stop there, as the actors continue to use phrases like “European Americans” and even cite the “White Organization of Students” in their discussion.
“The basic idea was to get people to forget their situations and imagine what it’s like to be a minority,” said Christine Whack, who played a character in the scene. Several students found this discussion particularly difficult to listen to. “Some people stormed out of the room,” Whack added.
Some of that tension was presented by design. “The goal of the program was to challenge students’ thoughts on some hot issues that are fairly uncomfortable to deal with,” said Diversity Center Programs Coordinator Rob Ryan.
The tour continued on through a room lined with photos of people with different body types. A cleverly placed “plant” in the tour groups made several comments about the appearances of those pictured.
Next, the tour group was taken into a room to hear the monologue of an anorexic dancer as she continues to push herself beyond her limits. Student performers wrote the scene, along with several others.
The tour then headed to the basement to view a set of scenes titled “Blue Light Special,” which dealt with sexual orientation and acceptance. The scenes ranged from a very personal coming out story to a dramatized confrontation loaded with violence and bigoted epithets.
The final room on the tour featured a party scene in which a male student takes advantage of a classmate after drinking heavily with her. Many students found the realism of this particular situation troubling. Sophomore Leslie Buck said that that scene resonated with her “because it’s something we have to deal with every weekend.”
Though Windows Through Walls is based on similar programs at other colleges, it was designed with the students here in mind. Said Ryan, “We tried to pick issues that we thought were a little more relevant to the Lawrence campus.”
The content and format of the program was kept under careful wraps to maintain the surprises that each scene offered. Upon arriving, guests were asked to sign a nondisclosure agreement, stating that they would not talk about the program until after the last tour. 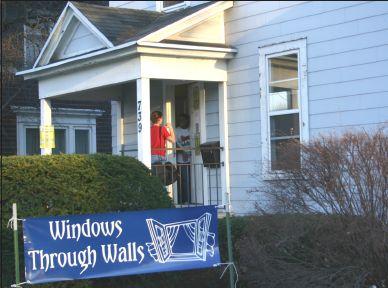 Drew Baumgartner Windows Through Walls included scenes depicting anorexia, racism, homophobia, rape, and self-image issues. The program ran Tuesday and Wednesday evenings. (Brent Schwert) A female college student is taken advantage of by a male student after a long night of drinking. A homosexual student is assaulted verbally and physically. An anorexic woman pushes herself…