Harjinder Bedi (foreground) kicked off the first installment of the SoundBoard Sunday. The weekly program will feature pop music from Lawrence students, with an emphasis on audience participation.
Aline Drr 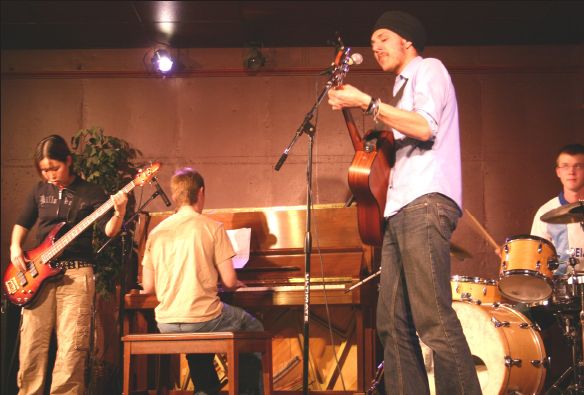 Harjinder Bedi (foreground) kicked off the first installment of the SoundBoard Sunday. The weekly program will feature pop music from Lawrence students, with an emphasis on audience participation. (Cora Schroeder)

The posters are all around campus, but people may still be wondering what the SoundBoard is all about. It is “pop music’s best venue on campus” and its first event was held last Sunday at the Coffeehouse, hosted by Harjinder Bedi.
The goal of the SoundBoard is to feature individual performers and expand the role of pop music on campus. It will step outside the typical Lawrence musical circuit, where classical and jazz music prevail.
“It is a pop show for pop artists,” said Skyler Silvertrust, one of the two people who brought the SoundBoard to life.
Jon Brion, a professional musician from Los Angeles, pioneered the SoundBoard concept. He plays a weekly show at an L.A. club called Largo where he takes requests from the audience, often using a wide variety of instruments during his performance.
SoundBoard events last one hour and are presented by a different host each week. The performer takes requests from the audience, a musical challenge that each performer will meet in a different way. The host might also bring in people from the audience to play and sing along.
Bedi said there were “some up and downs” during the show, which is exactly what SoundBoard is all about. It is a musical challenge, but at the same time it is nothing to be afraid of.
Paul Salomon, the other creator of Lawrence’s SoundBoard, said he would love to see people bring “weird” instruments such as melodicas or cowbells, so that even nonprofessionals can participate.
“The event is supposed to be fun, and the idea is to try new stuff in an informal way.” Silvertrust and Salomon say they want to expand the ways in which people view and understand pop music.
The SoundBoard performances will take place at 8 p.m. each week in the Underground Coffeehouse. While most performances are planned for Sundays, scheduling for certain shows may be subject to change.
Next week’s show is planned for Sunday at 8 p.m. and will be hosted by Pete Snyder, followed the next week by Patrick Ehlers and the week after by Mark Johnson. 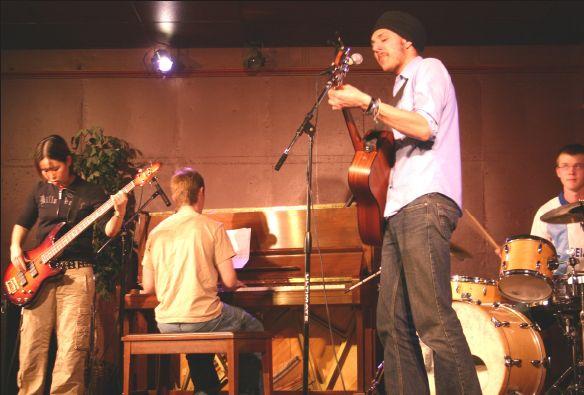 Harjinder Bedi (foreground) kicked off the first installment of the SoundBoard Sunday. The weekly program will feature pop music from Lawrence students, with an emphasis on audience participation. (Cora Schroeder)