Bar patrons will still have to smoke outside.
Emily Passey 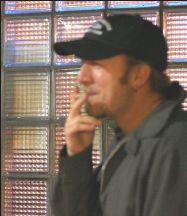 Bar patrons will still have to smoke outside. (Brent Schwert)

Appleton voters turned down a referendum last week that would have relaxed the smoking ban passed last year that effectively eliminated smoking from all workplaces and public spaces.
During the past year and a half, there has been a considerable amount of action supporting or denouncing the ban.
In the fall, it was decided that there would be a referendum to significantly alter the ban by allowing bars, nightclubs, bowling alleys and restaurants to reinstate smoking privileges in separate bar areas.
The April 4 referendum, billed by its advocates as the “Smart Smoking Ban,” failed to pass and the smoking ban remains in place just as it was first enacted.
Students and members of the Appleton community have seen signs proclaiming that the smoking ban goes against the rights of individuals and has aversely affected business owners who must struggle to keep customers.
Some bars, like Dr. Jekyll’s on College Avenue, have opened patios in the last year to give smokers a more social and inviting place to stand.
Ron Teske, owner of Dr. Jekyll’s, said that the patio has been a welcome change to his bar, although he has lost business. In the last year Teske said he has seen about a 20-25 percent drop in business from the previous year. He said he still has a steady enough crowd of loyal patrons but sees fewer big nights. This is a common problem for many Appleton bars.
Many people live near or on the outskirts of Appleton and have places to go where they can smoke in neighboring cities, Teske said. He has had bar owners from surrounding cities like Neenah and Menasha actually call him and apologize for his loss and their gain of business, a gesture he takes with some humor and appreciation.
Though Teske campaigned actively, first to overturn and later to amend the smoking ban, he “knew it was going to be a long shot.” For him and the other business owners, he said, it is all about business rights. “Nobody’s going to argue the health issues,” he said.
Teske had hoped that the referendum would pass, but now that it has failed, he has decided he is ready to work harder to advertise his place as the comfortable neighborhood pub that it is.
Teske is not a smoker and neither is his wife. He said they have really enjoyed the lack of smoke for a change, even if it did come with a decrease in business and profit.
Though they weren’t looking forward to welcoming the smoke back if the legislation had been passed last week, he said he would have definitely reinstated the smoking privileges.
Chad Van Daalwyk, owner of The 10th Frame Bowling and Spirits, is another Appleton business owner affected by the smoking ban. He has a different point of view than Teske, however.
Though Van Daalwyk has lost some business in the last months, he says that he would not have reinstated smoking had the referendum passed last week.
He and his family are nonsmokers and enjoy having less cleaning to do and a different, more family-oriented atmosphere in their bowling alley, which also has a restaurant and bar.
Though he likes being smoke-free, Van Daalwyk is still set against the city’s decision.
“They shouldn’t be able to tell me how to run my business,” he said. He favors a statewide approach and believes that it will probably be another four to five years before that is a reality.
Interestingly, neither Teske nor Van Daalwyk live in Appleton, so neither could actually vote on the legislation. For Teske especially, he says that many of his best patrons live outside of Appleton as well. When asked whether this may have impacted the results, Teske thought not.
Others have voiced concern that the maintenance of the Appleton smoking ban will contribute to an increased number of drunk driving incidents in years to come. If people are choosing to drive longer distances to frequent bars that allow smoking, the potential for accidents as they return may be greater.
Lawrentians have been somewhat affected by the smoking ban, though probably less so by recent developments. Senior Maddy Kaudy, a smoker, says that she and her friends head downtown less often these days. The fact that she and other smokers must leave the building to smoke affects her choice, especially in the middle of January.
Kaudy said that there is another, less direct, reason that she and her friends stay on campus: “Nobody’s there.” The bars and clubs are not filled with people anymore because it is easy for Appletonians to go elsewhere and Lawrence students with cars may find some new attractions away from downtown Appleton.
Perhaps the VR will see more business in the next years as the smoking ban continues to remain a steadfast part of Appleton life. And perhaps business owners like Teske and Van Daalwyk can set a strong example for others and in time, can work together and help push toward passing a statewide smoking ban, a measure that many feel would positively impact both health and business. 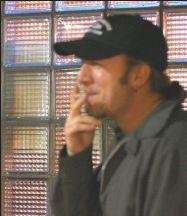 Bar patrons will still have to smoke outside.