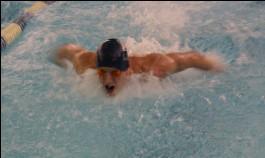 Personal bests and high spirits were abundant last weekend as both Lawrence swim teams finished their seasons well at the Midwest Conference Championships at LU’s Boldt Natatorium. The men finished second to a very deep Grinnell squad while the Women reeled in third, behind Grinnell and Lake Forest.
Coach Kurt Kirner made clear his feelings on the team’s performances, saying their swimming was “awesome, with great team chemistry and impressive maintenance of intensity throughout the three-day meet.”
Senior captain Adam Kolb, who got a few personal bests himself, had time to notice and remark that the team’s performance was the “most spirited and inspired” he had seen while at Lawrence. Fueled by both fans and team members, he said he “couldn’t have asked for a better final meet.”
Among the great performances was one given by senior Steve Vander Naalt, who took two firsts in both the 100-yard and 200-yard backstroke. Both were personal bests, with the beating of his previous 200 time being the self-professed “only thing he still wanted to accomplish in swimming.”
Freshman Pat McCrory broke two team records and his performance was enough to earn him a prestigious B cut for nationals.
Leading the way for the women were senior Heather Prochnow, freshman Haley Vatch and sophomore Jenni Hair, who all took medals in their respective races. Most notably, in the 1,650m Hair pushed hard and passed a competitor in the 66th and final lap to take third place, while Prochnow gave an outstanding performance to take third in the 100-yard butterfly.
Also noteworthy is diver Jeff Brown who took first in the 3-meter competition and second in the 1-meter.
Coming into the meet knowing that they were going to be hard-pressed to compete on the team level with the huge Grinnell teams, the Lawrence squad was able to look at this as a chance to push even harder for titles in individual races and relays. Vander Naalt noted that Grinnell has been the number one team in the conference since he has been at Lawrence. Expecting them to be on top again this year, the team came into the meet thinking that all they could do was put up their best personal numbers.
Kolb remarked at the ongoing positive attitude of the team by saying that, instead of looking at this deficit pessimistically, the team instead took on an optimistic but still highly determined mentality. He characterized this team attitude, saying, “I know that I swim my best when I am swimming against faster swimmers, it helps to push me to my full potential.”
The Conference meet and season were summed up perfectly by Coach Kirner when he said, “I felt great going in and felt even better at the end. It was just one of those seasons where everyone was healthy and things just went right.”
Even though Kirner was named MWC Coach of the Year, he said it was in no way a personal achievement, but instead a testament to the nonstop hard work and the perpetual positive attitude that this team showed all season long. And besides, what great swim season isn’t summed up by the coach getting hurled into the pool by a jovial and celebratory team?