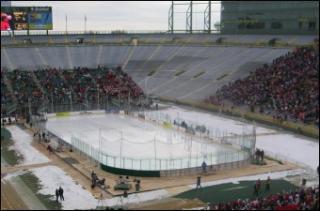 To fans of the NFL, Lambeau Field is a historical landmark. To Wisconsinites, Lambeau is nothing short of a shrine.
This year, as the Packers stumbled through a 4-12 season, the incredible play of one of Wisconsin’s other storied programs garnered some additional limelight. After starting the season 1-1-1, the Wisconsin Badgers men’s hockey team won 17 of their next 19 games, becoming the No. 1 ranked team in the nation on Nov. 28.
After slipping to No. 4 over the past month, the Badgers may have needed a little nudge back into the win column last weekend. It seems that 40,980 fans packed into an adapted Lambeau Field did just that. As the Badgers prevailed 4-2 over visiting Ohio State, they not only regained some of their lost momentum, but also put a cherry on top of one of this year’s most interesting stories in college sports.
The Frozen Tundra Hockey Classic successfully brought Wisconsin’s biggest
winter sport back to its outdoor roots – and made appropriate use of one of America’s most famed playing grounds. Obvious comparisons to Ice Bowl 1967 aside, Lambeau has been long overdue for an event of this magnitude.
The old-fashioned style of outdoor hockey unofficially ended after the 1957 world championship final held at Lenin Stadium in Moscow. Two recent games revitalized the grandeur of playing in this outdoor stadium fashion. In 2001, Michigan and Michigan State played to a 3-3 tie in front of 74,554 at Spartan Stadium. Two years later, the Edmonton Oilers fell to the visiting Montreal Canadiens 4-3 with 55,000 present.
Yet the Lambeau experience surpassed
the other two in some ways. Unlike the Michigan “Cold Wars,” as they were known, Lambeau was actually below freezing throughout the entire game. It also goes beyond saying that Lambeau has far more history than Edmonton’s Commonwealth Stadium.
Usually dormant throughout the cold winter of the Upper Midwest, over the past few weeks Lambeau was converted into the biggest outdoor hockey venue the state has ever seen. Temporary boards and a makeshift cooling system – to protect the ice from the ground’s heated turf – were placed on top of the field during the three weeks previous to the game. Uncovered plywood walkways surrounded the ice sheet, successfully recreating an outdoor rink feel.
The most awestriking aspect of the game was the atmosphere created by the spectators. Although the ranks of fans seemed more diffuse than in an arena setting, the event maintained an incredible intimacy.
A constant murmur of fans was audible throughout the game. After Wisconsin goals, the evening sky erupted with an outdoor goal horn and amazing fan noise.
The first such celebration came only 23 seconds into the game as Badger captain Adam Burish slotted an early goal. Wisconsin controlled most of the game, but Ohio State took advantage of sloppy mistakes to stay within reach the entire time. It would take an empty net goal with less than a minute remaining to settle the affair.
What better way to end such an amazing occasion than with the Lambeau leap? UW players took turns struggling up the padded wall with help of their fellow students and fans. Even goalkeeper Shane Connelly had a somewhat successful go at it.
There is no question that the unique mass of fans clad in green, gold, red and blaze orange knew they had been a part of something special as they exited the Frozen Tundra. In a way, they saw the largest spectacle of pure hockey ever: outdoors, unpaid, in the cold, and under the lights.

Alexander Weck A view of the adapted Lambeau Field from the northeast corner of the stadium To fans of the NFL, Lambeau Field is a historical landmark. To Wisconsinites, Lambeau is nothing short of a shrine.This year, as the Packers stumbled through a 4-12 season, the incredible play of one of Wisconsin’s other storied programs…