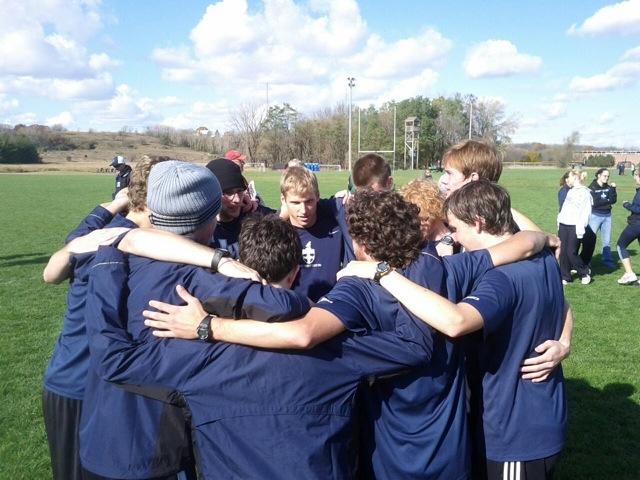 Crossing the finish line as the Midwest Conference’s fastest runner was the lesser of the two goals that Sam Stevens set for himself and his team last Saturday — the more important one was a team conference victory. After finishing first overall, the junior standout knew that the following two minutes would “decide everything.”

Within the next several minutes, he knew. The Lawrence University men’s cross-country team claimed the Midwest Conference title for the first time since 1985.

“It feels great,” remarks third-year coach Jason Fast, winner of the Midwest Conference Coach of the Year award. “They wanted this more than anyone and they showed it every day at practice and in their preparation.”

After an unchallenged reign atop the Midwest Conference standings for the past fourteen years, Grinnell College’s men’s cross-country team was finally supplanted. Over the past year, Lawrence and Grinnell have developed a fairly intense rivalry.

Fast noted, “During preseason camp, it was just words on a sheet of paper, but it became our mantra — Beat Grinnell.” Grinnell showed its might by placing directly ahead of the Vikings at the Brooks Invitational in Oshkosh. Thus, both teams knew that the conference meet would be a dogfight.

“[Grinnell] didn’t just lay down and let us win,” noted sophomore Dan Thoresen. “We went after it and we took it, which was pretty exciting.”

In a race that was decided by a mere two points, the Vikings came through on all levels. Not only did Stevens win, but also four other Vikings claimed All-Conference: Sophomore Curran Carlile, 5th overall; freshman Kyle Dockery, 6th; sophomore Jamie Brisbois, 19th; and senior Sam Estrem, 20th.

Every single scoring member of the team set a personal record. Stevens covered the 8000 m course in 25:10, which is the fastest time for any runner at the conference meet since 2003. Carlile, who has been struggling this year, finally broke through and ran an impressive time of 25:38. Dockery crossed the line right behind him in 25:41, which was an incredible 56 seconds in front of the next freshman to finish.

Brisbois and Estrem ran 26:24 and 26:30 respectively to claim the last two All-Conference Runner awards. Senior Tom Coben finished close behind them with a 26:42, which made him the 24th finisher. Thoresen, who also hadn’t been having the kind of season that he wanted to have, received some solace from setting a personal record finishing 36th with a 27:20.

While the two graduating seniors will leave a void of leadership and dedication, Fast is confident about the prospect of the following years. When asked about the possibility of creating a dynasty, he remarked simply and humbly, “We want to be in a position to win every year.”

Thoresen notes that their competition is “not going away, but we want to take this energy and build off it.”

For most of team, the victory is merely the cherry on top of what was an incredible season. Freshman Dockery noted that from the very beginning, the team was a great support group for him in all aspects of his life. “[The team] made my transition into college easier,” he commented, “I didn’t realize the size of impact that the team would have.” Fast also realizes that the conference victory isn’t the end-all be-all for the students on his team: “[This victory] will give them all confidence moving forward to accomplish even greater things.”

The Vikings have their last meet of the year next weekend at the NCAA Division III Midwest Regional Championships in Rock Island, Illinois.

Alex York (Photo courtesy of Alex York) Crossing the finish line as the Midwest Conference’s fastest runner was the lesser of the two goals that Sam Stevens set for himself and his team last Saturday — the more important one was a team conference victory. After finishing first overall, the junior standout knew that the…