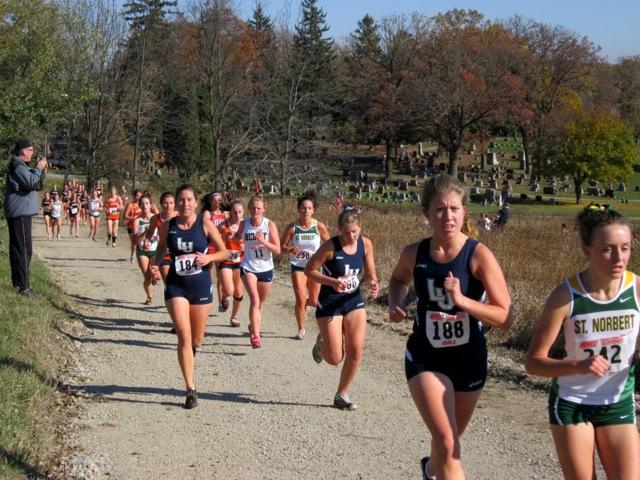 The Lawrence University women’s cross-country team has had an incredible year, culminating in a blazing fast 5th place finish at the conference meet at Ripon College last weekend. This was the most successful season for the women’s team since 2006, when the team took 2nd overall at the conference meet.

Every race of the year saw the majority of the runners having large drops in their season best times. When senior Rosie Graber was asked how the team made so much improvement throughout the year, she responded simply, “we set our goals higher.” Head Coach Jason Fast noted, “Every race gave them more confidence. You could tell week by week, a great race would be followed by an even better workout the following week.”

The Vikings were led once again by senior standout Emily Muhs, who finished 12th overall in a time of 22:33 over the 6000 m course. Making the All-Conference team for the third consecutive time, Muhs joins an elite few of Viking women who’ve achieved this impressive feat. Graber, who battled sickness through much of the preceding week, finished next for the Vikings in 30th place with a time of 24:08.

Sophomore Anna Ratliff capped off a season of huge improvements with a huge personal record of over a minute finishing 36th in 24:38. Freshman Maggie Mahaffa also finished her season off with a bang dropping 46 seconds off her personal best running 25:00 and finishing 41st overall. Senior Cathy Kaye rounded up the scoring with an unbelievable personal record drop of over two minutes — a time of 25:44.

Graber attests some of the success to the amount of support that they received during the race: “It seemed like every few meters there would be someone shouting, ‘Go Lawrence!’ — which makes it so much easier to battle through.”

The Vikings are proud of their success this year, but have their goals already set for the next few years.

“We may have only moved up two places from last year, but this group of women made an even bigger jump in attitude,” remarked Fast. “Now that we are in the top half of the conference we can work on bringing home a conference title in the next few years.” Fast admits that it’s not just the training and preparation that have contributed to the success.

“Our numbers for our women’s team were very good this year and… they are also a very tight knit team who really care about each other and support each other. Both of those factors directly translated to our success.”

The Viking women will join the men next weekend in Augustana, Ill. for the NCAA Division III Regional Championship, the final race of the season.

Alex York (Photo courtesy of Alex York) The Lawrence University women’s cross-country team has had an incredible year, culminating in a blazing fast 5th place finish at the conference meet at Ripon College last weekend. This was the most successful season for the women’s team since 2006, when the team took 2nd overall at the…